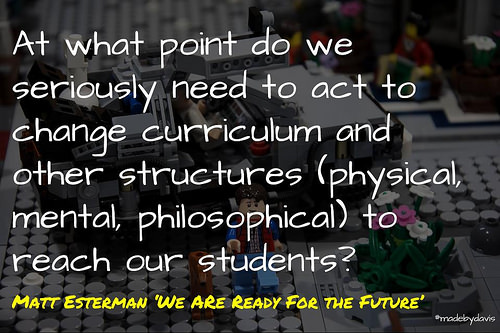 I recently got in a conversation with some colleagues about the future of education. It was the end of a long day and we pondering on how schooling might be different in ten years time. These are some of the ideas that were bandied around:

What was interesting was that all of the predictions made about the future, have already been enacted somewhere in the past. The question then is why are they not more mainstream? Why are such thoughts too often seen as the exception to the rule?

Will Richardson’s argument is that we are in need of drastic change in education. For some this means a revolution, while for others it is about support. Whatever the change is, it starts with one person trying to make a difference. Richardson suggests 10% at a time. Maybe this is bringing a new practice into the classroom, working collaboratively as a team on a problem or simply flipping the roles and becoming more of a learner. The next step after this is to scale the change and help it grow and spread.

Richard Olsen’s suggest that many of the challenges with change in education often come down to our belief about learning. Something that far too many take for granted. It is here then that the conversation needs to be had, to make visible as far as possible our thoughts, inconsistencies and beliefs. This then is part of the purpose of the Modern Learning Canvas. Not as a tool that pushes people in any specific direction, but rather helps them understand their present context and clearly plot the next iterative step forward.

As Matt Esterman highlights, we know the future is coming, next we need to seriously act on it. The first step with any change though is calling out the elephant in the room. Identifying the perceived problem and talking about the issues. However, the question remains, how might we make the changes for students today, rather than wait for another tomorrow?

For those looking for ideas and inspiration, here are a some books that have helped guide my thinking along the way:

Predicting the Future Yesterday by Aaron Davis is licensed under a Creative Commons Attribution-ShareAlike 4.0 International License.