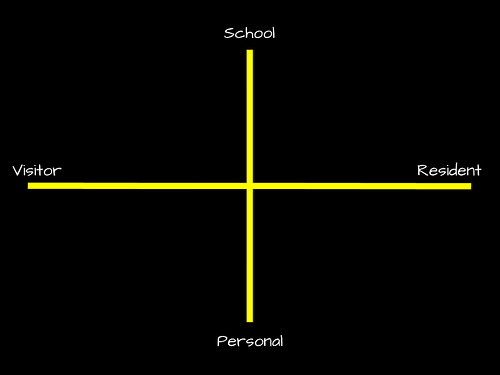 In an attempt to make sense of the divide when it comes to the use of technology, Marc Prensky published two articles in 2001 in which he coined the terms digital native and digital immigrant. He used this to explain the difference between those born after 1980 who have grown up with technology being in every part of their life, compared with those ‘immigrants’ who have had to pick everything up.

The problem with the native/immigrant explanation is that it lacks nuance. Firstly, it assumes that if you were born after a certain time that you represent certain disposition. Secondly, it fails to recognise that our use of technology is forever changing over time. Thirdly, it was developed in a time before the prevalence of social media and its impact on how we use the web. In contrast, David White and Alison Le Cornu offer a more fluid typology with their notion of digital visitor and resident.

White and Le Cornu suggest that our use of different spaces on the web fluctuates between two states: that of the visitor whose use is often short term and task orientated compared with the resident who sees their participation as being an important part of their lived experience. Unlike Prensky, White and Le Cornu argue that our use of the web is constantly evolving, not only different from one space to the next, but also from changing over time. For example, today I maybe only be a visitor to Twitter, but be a resident of Facebook, whereas tomorrow for whatever reasons this is might be completely flipped around.

Doug Belshaw explains this problem by pointing out that workflows should always be a case of permanent beta. Although this may not be a month to month or even a year to year thing. If we were to reflect our use of the web ten years ago, I would find it hard to believe anyone’s map would be exactly the same.

Another dimension which White and Le Cornu add to this is the question of place. They suggest that our use always moves between the personal and the organisational. For example, some students use spaces banned from them in school, such as Facebook and Youtube, to participate in what can be described as the learning black market. That is, informal collaboration and communication in aid of learning.

What is interesting about the visitor and resident typology is that is that it is not necessarily about the tools, but how we use these tools. As White shares, we can give all the guides we like, but people’s participation within different spaces only changes when they can identify a reason why that is pertinent to them. With this in mind, creating our own map of the web offers a great way to start a conversation about how and why we use technology.

One of the challenges with technology is to move beyond supposed simple solutions. Often terms like visitor and lurker are used with negative connotations. Instead the question should be why are visitors and what would change if we were to take up residency. The same thing can be said of those spaces which we have come to depend upon, what would happen if they were to shut down? What is also interesting is that many social media platforms do not allow visitors. That is, an existence without some sort of sign-up. This alone is a conversation worth having, as to why this might be the case and what the consequence of such restrictions might be.

For more information, have a go at using Google Drawings to create your own map, see White’s post or his short introduction from White:

Mapping the Divide: Visitors and Residents on the Web by Aaron Davis is licensed under a Creative Commons Attribution-ShareAlike 4.0 International License.

24 thoughts on “Mapping the Divide: Visitors and Residents on the Web”