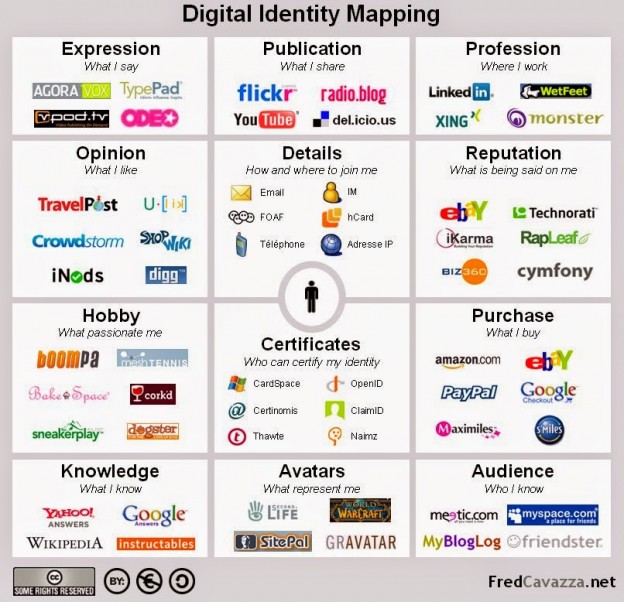 In my previous posts, I spoke about connecting with people both in person and online. The problem that I found with both of these situations is that connections are often only ever as deep or strong we let them be. If we are unwilling to give back, should it be any surprise that people don’t always want to share with us? However, what it took me a little bit of time to realise was that ‘giving back’ was more than just about ideas and information, it was actually giving a part of you. Taking more ownership over my online identify was therefore my fourth marker to becoming a more connected learner.

I had known that the only person I was fooling in trying to hide behind some sort of anonymity was myself. The reality was and is that if someone really wanted to piece together ‘who’ I was, there were enough crumbs left lying around to guide them. There were two aha moments that led to me taking more control over my online identity. The first moment was in watching +Anne Mirtschin‘s ICTEV12 presentation ‘The Networked Teacher’.
Although I had attended the ICTEV12 conference, I had not gone to Anne’s presentation. However, after signing up for her presentation for ICTEV13 ‘The Changing Space Of Learning!’ I went back and watched her presentation form 2012. In this presentation, Mirtschin discussed the notion of creating a ‘digital badge’ online. Not to be confused with the ‘open badges’ movement, she meant something that we ‘wear’ online that tells people who we are. For Mirtschin,  this badge includes three key ingredients: a consistent image, clear username and detailed profile. Each of these elements is an integral part of branding who we are online.
Mirtschin explained why having a badge is so important while discussing nings, custom social networks which require permission to join. She stated that moderators will not allow people in if they don’t give anything of themselves. However, it occurred to me that the same can be said about all forms of connections. Unless you provide some sort of background, then people don’t really know who they are connecting with and are often unwilling to share.

Dispelling the Myth of Digital Dualism

The second aha moment that really made me reconsider my notion of digital identity was the interview with +Alec Couros on the +Ed Tech Crew. Going one step further than Mirtschin’s idea of the digital badge, Couros spoke about the power of being connected learner and the importance of fostering a positive digital footprint online. This is particularly pertinent for in today’s world if we do not control what is said about us online, then someone else will do it for us.
What was significant about Couros’ message was that he disputed the myth of the ‘second self’. He argues that instead of seeing our online presence as somehow being separate, we need to address it as being one aspect of who we are. For example, instead of isolating our ‘digital identity’ in schools, the focus should be on teaching students to be better citizens with their online presence as part of the jigsaw. For the reality is that our online identity is simply a continuation of who we are into the digital realm.
To properly understand what Couros is talking about, he has created a great guide of things to consider when consciously creating a digital identity. In it he goes through a range of tools and questions to ponder upon. Overall, he provides a great starting point for taking back your online identify.

Own Your Identity Before Someone Else Does

The lessons I learnt from both Mirtschin and Couros led me to make a few changes. Firstly a reconsidered my badge as Mirthen would put it, in particular my image and profile. I replaced my QR code with a portrait painted for me by an ex-student. Although it has actually created more confusion in itself, I chose this image because to me it represented how someone else saw me, which in an online environment I thought was significant. For my profile, I replaced the ambiguity with some reference to my areas of teaching, interests and location.
I think that, like Mithen, if I had my time again I would have changed my handle, but sometimes it is more complicated to change. To be honest though, I had been using mrkrndvs for a long time. As I couldn’t get an email with my own name, I simply dropped the vowels. That is how I got to ‘mrkrndvs’. At the very least, I moved away from hiding behind my initials to at least using my full name. To me that was more important.
In addition to improving my badge, I set out to control the information that was out there about me by signing up to such spaces as LinkedIn and About.Me. If someone was going to know something about me, then it may as well come from me. I also created various profiles, with sites including Gravatar and Disqus, to manage my comments across different formats, as well as to develop a consistent presence.
Taking some sense of ownership over my online presence has not been easy, but has definitely been worth it. I am sure that there is more that I can do and it is an ongoing process, but it has to start somewhere. So who are the people that have influenced your thinking about identify and what are some of the things that you have done to develop a positive presence online?

Take the Power Back – Steps in Taking Ownership of My Online Identity by Aaron Davis is licensed under a Creative Commons Attribution-ShareAlike 4.0 International License.