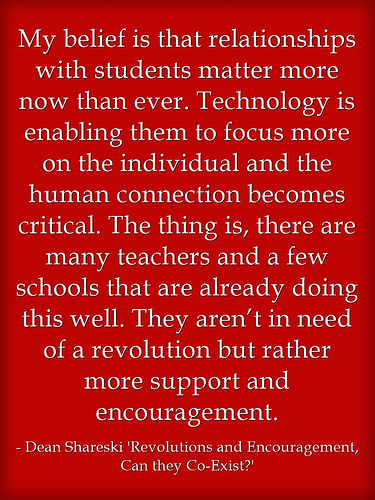 Some people argue that online connections are conducive to echo chambers. As I have discussed elsewhere, influenced in part by David Truss’ great post, I feel that such thinking is about mindset more than anything else. As Truss stated:

A good PLN will pull in learning from places I don’t normally go, and this means that even when good ideas bounce around, perspectives on those ideas don’t stay static

This was clearly demonstrated recently in the debate that arose from George Couros’ tweet:

I think when we say things like “school is broken” it really demeans the hard work of so many educators who make school awesome everyday.

Provoked, Will Richardson wrote a passionate post wondering if in worrying about feelings we have lost the ability to truly listen and debate. This was then followed by a post from Dean Shareski who suggested that a strength-based approach was a better answer, where instead of giving our attention to what is wrong, we stop and celebrate what is right, reflecting on what works. Although, like Shareski, I see a place for a critique of the system from those compass barers like Will Richardson, Ken Robinson and Seth Godin, I wonder if we highlight those good things enough.

Here then are three schools that are doing innovative things ‘that work’, fixing the system one step at a time:

Located in Melbourne’s south-east, the school has have a vision to develop tomorrow’s entrepreneurs by having students do things such as teaching each other and learning in a range of different settings, from a space craft to a dragon boat. See the great article in The Age and Suzie Boss’ post in Edutopia for more discussion.

Located just to the north of Brisbane, the school has engaging with a wide range of educational voices from around the world to design an education which leaves those students starting school now as ready as they can for when they finish in 2028. This has included implementing disciplined collaboration, a complete overhaul of learning spaces and the incorporation of heutagogical learning.

Located to the east of Melbourne, the school has turned around from being on the brink of closure by placing students and their learning at the centre. This has involved being flexible in regards to timetables and classes, as well as providing authentic opportunities for learning, such as working in the school’s cafeteria.

This is just a few examples of schools whose innovation is a constant source of inspiration and motivation. For more examples check out AITSL’s Learning Frontiers, as well as Greg Miller’s post celebrating a range of innovative schools in NSW. While, for a more global perspective, check out the responses to Steve Wheeler’s call out on Twitter.

Although I agree that there are elements of education that are not right, I’m not sure a revolution is the fix. As both Couros and Shareski make note of, such discussions often tarnish the great work some are doing. As I have murmured in the past, such ideals are not always ideal. Such ideals only ever put undue pressure on everyone, creating a fixed scenario where we either pass or fail.

Providing his own take on this, Matt Esterman wrote a post last year wondering if we need a renaissance, rather than what he calls a neverlution. He started this discussion with a list posted on Twitter:

Do you want a learning revolution or a learning renaissance? #aussieED #edchatnz Thoughts? pic.twitter.com/Lm2Qvpn6pU

Esterman’s point is that rather than bloody warfare where endless people get hurt in the process of change, maybe we can find possible fixes and solution by pushing the current boundaries by more creatively reflecting on the past for inspiration for the future.

Providing another perspective, Jason Markey calls for evolution, that is change for the better. Too often, Markey points out, we see change as being for change’s sake. Instead, evolution is about changing to advance our present state.

I think that there is something to be taken from each of these ideas. For although Richardson’s argument is that we need to be ‘different not better‘, I feel that such schools like St. Paul’s and Wooranna Park are thinking differently, challenging the status quo. Change will not occur through a process of educational cleansing where those staff not up to the challenge are simply excluded. Whether it be Markey’s better or Richardson’s different, we need to work with the ones we have: the parents, the colleagues, the students, the community. To focus on ‘who’ not only misses the point of change, but undermines the why driving it.

Change takes a lot of time and conviction, but it is not always clear about what actually constitutes ‘better’, because of this it is easy to doubt the direction things are moving. This then is why being connected is so important, knowing that you are not alone. Programs, such as Learning Frontiers and the New Pedagogies for Deeper Learning, are so important, for they help foster such connections. It is then schools like Wooranna Park and St. Paul’s that act as beacons helping to guide others. For although there are plenty of compasses out there, mapping such futures is precarious. Sometimes the best we can do is to celebrate the innovations of others and reflect on how such actions might work in our own situation, context and with our why.

Innovation, Context and Why – A Reflection on Support and Encouragement by Aaron Davis is licensed under a Creative Commons Attribution-ShareAlike 4.0 International License.

37 thoughts on “Innovation, Context and Why – A Reflection on Support and Encouragement”