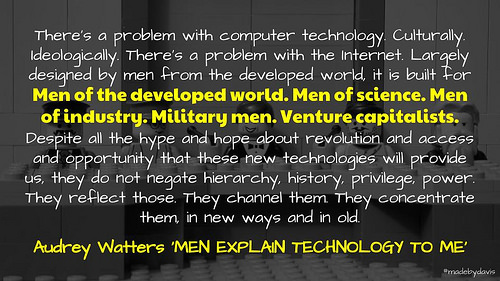 In a post titled ‘Men Explain Technology To Me’, Audrey Watters unpacks the statistics and challenges that face women working in edtech. Whether it be the predominance of white males running the internet, an inherent culture of ‘mansplaining’, the culture of violence and abuse or the sheer numbers of women actually not working within the big edtech companies, Watter’s paints a picture of oppression.

Although gender and oppression is nothing new, it is the extremities of Watter’s account which brings the issue to the fore. In addition, Watter’s emphasises that these challenges are in no ways just an ‘edtech’ issue. Here is a few examples which help elaborate this:

The question I was left with was how do I respond? In particular to the wider inequities at play within education. Too often we read things online or hear things at a conference and, for whatever reason, fail to properly follow up.

My initial step was to reflect on my own habits. I started with my 200 odd blogs in my RSS Feed. After downloading the OPML file, I put them into a spreadsheet and proceeded to categorise them. 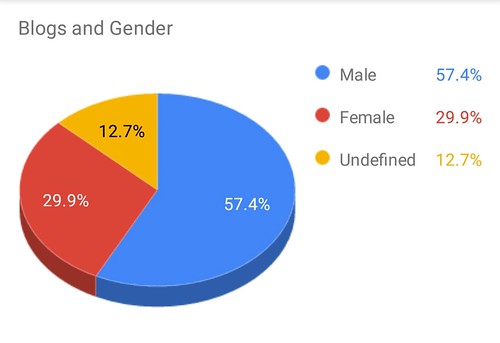 In addition, Tom Woodward pointed me to an app that analyses your Twitter: 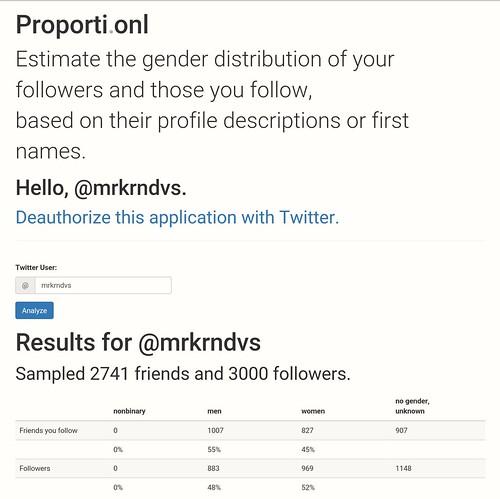 The story told by both is that I am as much a part of the problem. However, it also made me wonder about the biases that were within such applications. I then started exploring what could be done to change this situation. Some possibilities include:

With this all said and done, it feels naive to talk about solutions as if it is so clear cut. I fear being tokenistic, something Maha Bali makes point of in her post on marginality. I also worry about only focusing on one form of inequality, when as Watters points out, there are many, especially when it comes to edtech. I wonder if the real solution is actually being silent? Or in our lives actions and experiences? Maybe this post is simply adding to the problem and is itself a case of mansplaining? It is for this reason that this post has taken considerable time to write.

Coming back to technology, Greg Thompson talks about how technology has the power to make us. The question that I wonder is what sort of ‘us’ is it making. As always, comments welcome.

Is Gender an Elephant in the (Education) Room? by Aaron Davis is licensed under a Creative Commons Attribution-ShareAlike 4.0 International License.

52 thoughts on “Is Gender an Elephant in the (Education) Room?”