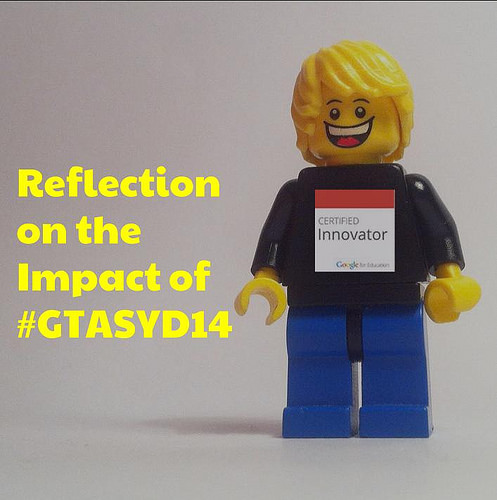 In a recent post, Jon Andrews reflected on the influence of Edutech and its ongoing relevance. It got me reflecting on my own experiences in regards to conferences and professional development. One event that stands out in particular was the 2014 Google Teachers Academy.

There was so much conjecture prior to the event about what it meant and how the representatives were selected. While in a conversation afterwards, one of the questions brought up was that of impact. I argued that time would tell the success of the evolution associated with Google Teacher’s Academy move from a focus on tools to a focus on innovation and change. However, a part of me thinks that this also misses something. Focusing on ‘success’ sometimes misses the chance influences and impact. As I have discussed before in regards to data and connections, reducing success to a particular outcome does not recognise the serendipitous learning and experience through failure.

So as I look back, here are some aspects that have impacted me:

So what about you? What big events have you been a part of? Programs that you’ve been privy to? What are the lasting impacts on your professional practice? As always, comments are welcome.

Learning, Innovation and Success – A Reflection on the Impact of #GTASYD14 by Aaron Davis is licensed under a Creative Commons Attribution-ShareAlike 4.0 International License.

8 thoughts on “Learning, Innovation and Success – A Reflection on the Impact of #GTASYD14”