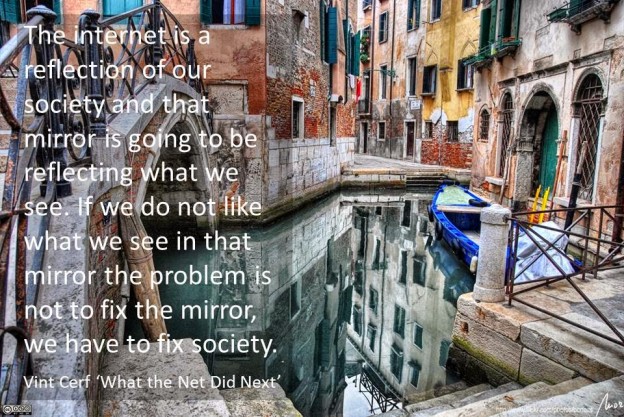 Voltaire once suggested that, “common sense is not so common.” So to can +danah boyd‘s It’s Complicated: The Social Lives of Networked Teens be seen as an attempt to reposition the debate about teenagers and the supposed scurvy of life in an online world. Boyd sets out to dispel many of the negative and dystopian views that so often fill the news. As she moves from one case study to another, I was left with many aha moments, particular while reading about fear and privacy. Having grown up with the practise of placing the desktop computer in a public space, it had never really occurred to me some of the deeper consequences of such actions. That is not to say that such approaches are wrong, but like every choice, everything comes with a cost. At its heart, the book puts forward many of the issues and arguments that are too often overlooked in mainstream education.
The reality is, living in a networked world is complicated for as Boyd states, it is both the same as, but also different from yesterday. For example, many teens cling to online networks as a social space to belong and just be. Like the drive-in of yesteryear, it is the structured unstructured environment where they can just hangout. However, online spaces are also considerably different to drive-ins though, for unlike the physical world, many of the actions and consequences in a digital world leave a trace and are forever ongoing for others to see.
I entered this book not quite sure what to expect. A part of me thought that Boyd would magically provide a breadth of tools and techniques for addressing the supposed dyer state teens on social media. Yet what I was left with was a series of thoughts and reflections about my own world. Boyd shone a spotlight on such issues as the supposed equality online, as well as the media fear mongering associated with addiction and sexual predators. However, the question that I was left wondering about the most was what are the consequences of the ongoing divide now occurring in all facets of life between those whose lives are increasingly embroiled with the online world and those whose aren’t – what Connaway, White, Lanclos, Browning, Le Cornu and Hood have termed as digital ‘visitors’ and ‘residents’.
It’s Complicated does not provide the panacea, that magical cure for all the social ills suffered by teens today (and yesterday and tomorrow) who live in a digital world. The reason that it doesn’t provide this is because it can’t, such a thing does not and cannot exist. Instead the book provides what America anthropologist Clifford Geertz described as a ‘thick description‘. A thorough account that not only provides a description of behaviour from a wide range of different points of view, but also an interpretation as to the context that produced such actions. As Boyd herself has stated,

I wrote this book so that more people will step back, listen, and appreciate the lives of today’s teenagers. I want to start a conversation so that we can think about the society that we’re creating.

The purpose therefore is not to provide an answer to societies ills, but instead to provoke dialogue and debate at both the micro and macro level, whether this be teachers in a staffroom or politicians producing policy.
Although Boyd’s book is written for adults about teens usually in America, in many respects it is a book that uses teens to confront adults from anywhere about many of the issues that we so often leave silent. I think that challenge that we have is to discuss these matters and from there create a more reasoned approach to the matter. For as I have spoken about elsewhere, it takes a village to find a solution and hopefully together we can create a better world for everyone.

Common Sense That Is Not Always So Common – A Review of Danah Boyd’s It’s Complicated by Aaron Davis is licensed under a Creative Commons Attribution-ShareAlike 4.0 International License.