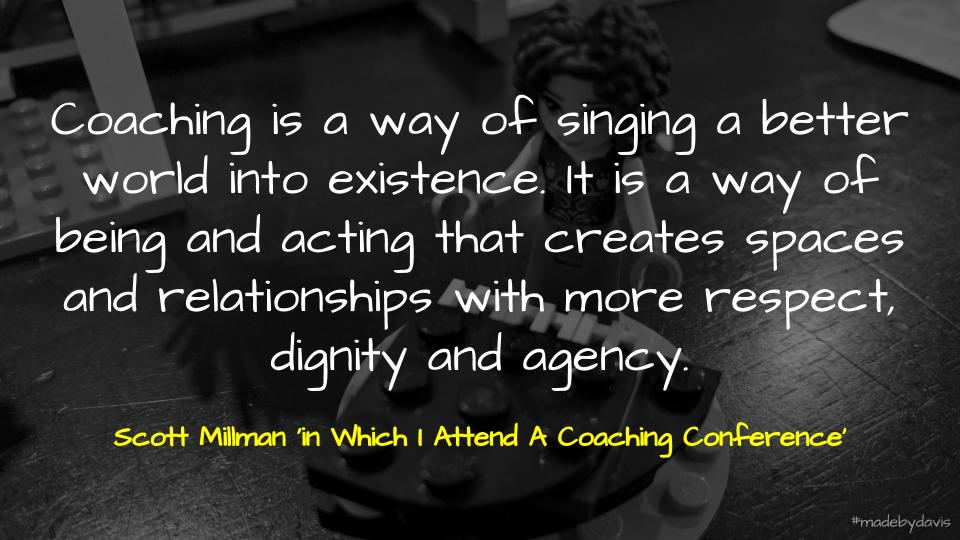 I recently attended the 5th National Coaching Conference for Educators held at the Melbourne Cricket Ground. I was not exactly sure what I would get from the conference. Having completed a course with Growth Coach International around leadership coaching a few months ago, I was interested in following up with my development as a coach. I was also interested in exploring strategies to support my work with schools and teachers with implementing technology. What I got was so much more.

There were so many thought provoking presenters, including Simon Breakspear, Rachel Lofthouse, Christian van Nieuwerburgh and Deb Netolicky. However, to riff on Marshall McLuhan, the medium was the message, with coaching being that medium. In regards to coaching and the conference, there were many ideas bandied. For me though three themes stood out: purpose, context and curiosity.

So many conversations started with why, such as:

The consensus though was that coming up with a single purpose is as much about the answer, as it is about working through a process co-construction to understand what coaching means within a particular context.

Schools are not simple places, nor are they all the same, each incorporates a range of complexities and influences. This includes the influence of space, such as the doings, sayings and relatings. The nuances associated with context was demonstrated through the case studies presented by Deb Netolicky and Alex Guedes. The challenge outlined when it comes to coaching is clarifying what is wanted and what is currently working.

A part of working out what works is identifying various strategies to support implementation and facilitation. How we talk to each other was pointed out as being central to any organisation, with conversation central to any coaching approach. Other possibilities shared included reflecting on video of teaching, recording audio and creating transcripts of coaching sessions. The reality though is that coaching is just one way of working together.

The message made time and again was that the context that must not be forgotten is that of the coachee. It is important to respect every conversation as it comes from a different perspective. Whatever kind of coaching is occurring, it is important that it is built on a respectful relationship.

No matter the intent or the context, schools need to provide coachee’s with a permission to be curious. Coaching, mentoring and guidance often occurs in the midst of play, sometimes literally in the playground. Some suggestions included supporting vulnerability, inquiry-based conversations, providing a safe place, encouraging dialogue, being non-judgemental and fostering the conditions of permanent beta. One of the challenges that impede much of this are the procedures which schools cannot get out of. Breaking with the culture of judgementoring and cruel optimism, Rachel Lofthouse talked about making practice privileged.

Having long attended various edtech conferences, one of the things that stood out was that I was in unfamiliar surrounds. Although I often participate in the monthly EduCoachOC chat and have acted as a mentor before, I have limited formal experience in regards to coaching.  Yet by its nature as being about coaching, the conference itself created an open environment in which to learn.

Some other links worth checking out:

Reflections from #CoachEd2017 by Aaron Davis is licensed under a Creative Commons Attribution-ShareAlike 4.0 International License.