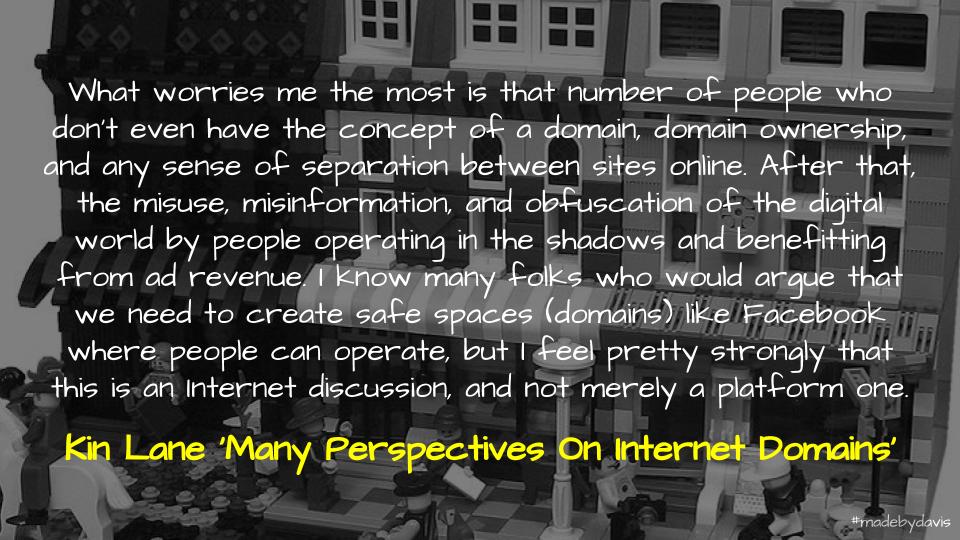 What is your domain name and what is the story, meaning behind your choice of that as a name?

In part, my domain name comes from my interest in the notion of marginalia, the stuff that we write, but never gets written. As J. Hillis Miller explains:

As we read we compose, without thinking about it, a kind of running commentary or marginal jotting that adds more words to the words on the page. There is always already writing as the accompaniment to reading.

It was also inspired by a friend, Fiona Hardy, and her blog Read, Watch, Listen. My first incarnation was on Blogger, where I had to use Reading Writing Responding. Although I liked the active nature of this, it was just too long.

I also had a little help from some friends as a part of the Connected Courses MOOC:

@mrkrndvs come find me in the garage once you got it going. Am working on mine here marianafun.es Yeap. Awesome domain name 🙂 #ccourses

@mdvfunes I have such a common name 🙁 Domain is a challenge. Any suggested sites for finding a domain name etc #ccourses

@mdvfunes @mrkrndvs The domain name is the title on the spine of the book of you in the public library of life. #ccourses

@cogdog @mdvfunes Alan are u saying go w/ it, let it grow & develop? I think I might. Kind of suits my Sunday drives. My meanders. #ccourses

@mrkrndvs @mdvfunes I was in same spot in 2002. I shelved it let my mind wander elsewhere. cogDogBlog emerged FWIW. #ccourses go meander

@cogdog @mrkrndvs the dog is right! domain names are art! they need the unconscious to flow 🙂

What was your understanding, experience with domains before you got one? Where were you publishing online before having one of your own?

My move from Blogger was initially about finding a place of my own. I saw a domain as being an opportunity to renovate and stick up posters without the landlord coming through for inspection. The wider ramifications for having a domain had not even crossed my mind. Not only could I have a space of my own, but in fact have infinite spaces, each with their own purpose.

What was a compelling feature, reason, motivation for you to get and use a domain? When you started what did you think you would put there?

Initially my attention was my primary site. However, my interest in (sub) domains was piqued as I opened the door to the #IndieWeb and the idea of POSSE. I setup an instance of Known and started using it for posting images to Flickr. This is one of the ways I have found self-hosted different from WordPress.com or Blogger. Although you can add a domain to both platforms, when it is your own space, there is so much more you can do with it.

What kinds of sites have you set up one your domain since then? How are you using them? Please share URLs!

Beyond my main space, I have created a number of sites for various purposes. They have included:

More recently I have made some effort to condense some of these spaces into a secondary site, Read Write Collect. In part this stemmed from my interest inreclaiming the presence on the web. One of the limitations is that webmentions can only be attached to so many sites, so that is why I moved much of my content into two spaces.

What helped you or would have helped you more when you started using your domain? What do you still struggle with?

What has helped me is having continual support from Reclaim Hosting. Not only do they help in resolving most of my technical issues, but they also have a wealth of resources too. If there is something that I still need to work on it is archiving some of my older sites as static HTML, as well as sharing resources across my sites.

What kind of future plans to you have for your domain?

I am sure there will be cases for spinning up a new domain to test a new application and/or theme. For example, I am interested in PressForward as a means of organising research if I ever went further with my studies. Overall though, I am pretty happy with how things are at the moment.

What would you say to other educators about the value, reason why to have a domain of your own? What will it take them to get going with their own domain?

It is easy to create a WordPress.com or Edublogs site and add in your own URL. This will often alleviate concerns around updates and security. However, the effort required in maintaining your own space seems a small price to pay for the power and possibility it can provide.

It feels like every time I tell my story I add something different. I am sure that there are parts I have left out or failed to elaborate. If this is the case, feel free to leave a question or a webmention. The conversation only starts here.

Alan Levine recently put out a request for stories about domains as a part of the Ontario Extend project. Here then is my response.