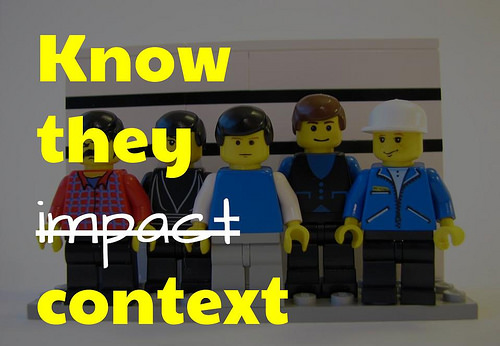 This post is my contribution to Steve Wheeler’s twisted pair challenge. Although not as esoteric as Wheeler’s pairings, it at least demonstrates the links between diverse ideas.

I’ll never forget reading about the spat that followed Collingwood’s loss in the 2003 AFL Grand Final. Having lost Anthony Rocca, a key position player, the week before, Mick Malthouse decided to trial Jason Cloke in the position of centre-half forward. A young player who had spent most of his 40 games in the back line, he was thrown into the fire and failed. With only a few possessions, the coach openly spoke about his disappointment as was David Cloke, a proud father, who spoke out about the comments. What stands out to me is the expectation that placing people in unfamiliar surroundings may magically pay off. (Add Glenn Maxwell batting up the order in India to that list, another classic example.) Maybe the player had spent time as a youth in that position, maybe they had shown some promise in a different context in different surrounds or was the right fit on paper. Whatever the reason, such sporting stabs in the dark, hopeful wishes you may like, often fail to proper more often than not.

A few years ago, I was faced with the arduous task of landscaping my backyard. Starting with something of a blank canvas, I drew up an outline of the space with circles and lines to mark the dimensions where the different plants would go. Sometimes it feels both arrogant and naïve planning out a space. After going to the local nursery, I decided to plant lilly pillies down the side of the property. The aim was to create something of a hedge. On the tag, it stated that in the right conditions a lilly pilly can grow up to 100 metres tall. After bringing in new soil, watering regularly and providing large amounts of fertilizer, two of the ten trees failed to take. In addition to this, even though they were all planted at the same time, those at the back grew twice as large as the those down the side. Another observation was that the irises planted near the dead lilly pillies also had struggled to take. This raised so many questions, such as the make-up of the soil, the sunlight in these spots, the potential of basalt beneath the surface and the mix of nutrients. The reality though is that I could have planted another tree in their place, desiring order and symmetry. However, more often than not nature does not work that way. So I left it. Admitting that just maybe the lilly pilly may not be the right plant for the spot.

So often we talk about knowing thy impact. That is, to evaluate the effect of our teaching on students’ learning and achievement. Although it is important to identify what is working and how we might be going. Another story that often goes untold is what impacts upon a teacher?

The easy solution in education that everyone jumps to is the desire to get rid of your worst teacher. However, I have heard many experiences where the supposed ‘worst’ teacher is the teacher who is also the ‘least’ supported. Don’t get me wrong, they are often provided emergency support. At the heart of the matter, they are left to plan alone, expected to create everything from scratch and provide little structured support.

Measuring thy context includes things such as: support provided, level of trust in the organisation, sense of confidence, opportunity to work in a team, size of the classes, the state of the learning spaces, when your classes are timetabled on and the list goes on. This is not a list of excuses, but rather a recognition of complexity associated with impact and its connection to context.

So what about you? What is your context and how does it impact you?