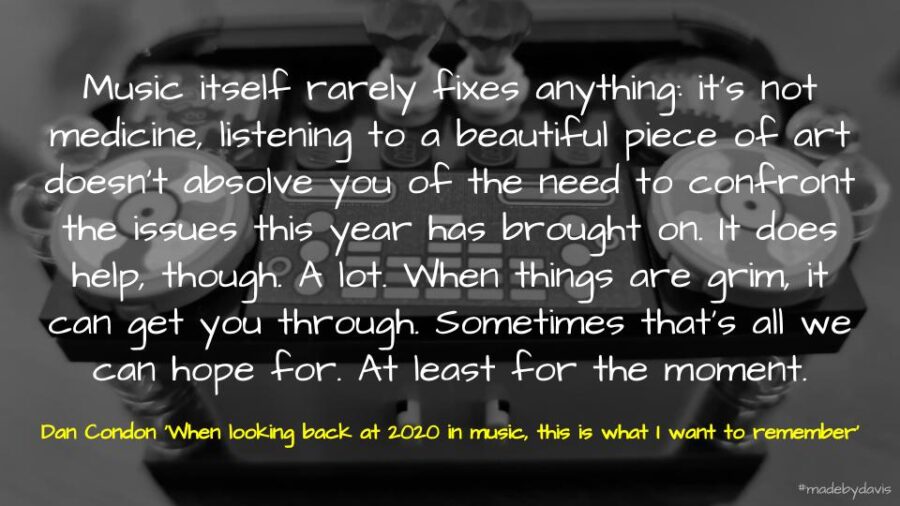 A reflection on the music that represented my soundtrack for 2020.

With 2020 a strange year on so many levels, here is the music that tied it all together.

I am sure that some might be put off by Parker’s move to ‘deft auteur-pop synergy‘, however I found this to be the first Tame Impala album to really capture my attention. Although the album touches on themes of nostalgia, lose, anxiety and inner peace, first and foremost I feel this album offers up a sound that envelopes you.

As a producer, Parker has more moving parts to balance this time, but he arrives at a deft auteur-pop synergy in which every last decision, down to the assorted cathedral-like reverb effects that lend his voice an otherworldly aura, become as intrinsic to the music as the melodies or the words. Though there’s a lot going on in the latticework of the music — springy analog synthesizer arpeggios, guitars doing unguitarlike things, layers upon layers of pastel lushness — the post-psychedelic swirl of The Slow Rush registers as an organic blend, with the songs never feeling cluttered or too tightly scripted.

Written before the onset of the coronavirus, it has been fascinating to listen to it in this new light. This was an experience that also happened with Run the Jewel’s RTJ4 and the death of George Floyd. Take for example the lines from One More Year:

I was blinded by a memory Like it’s someone else, like it wasn’t me And there’s every chance I’ll be learning fast And the day will come and then it will pass

It has also been interesting to see Tame Impala address the constraints of performing/promoting these tracks. After turning to solo performances, they have since morphed into a synthpop setup, driven by sequences and drum machines. In part, this was due to some members not being in Perth, but one wonders if this is where Parker was heading anyway.  It will be intriguing to see how much of this persists in the long term.

This year produced a number of albums that were clearly responses to the situation at hand. For example, Charli XCX stripped things back to what she had on hand with her quarantine album, How I’m Feeling Now. Taylor Swift used the opportunity to explore a different collaborators, sounds and storytelling.

With folklore, Swift has made a self-consciously minor transitional album, a grand readjustment. She’s nailed it. Swift, it turns out, is one of the few great pop chameleons to come along in recent years. She was great at gleaming Walmart country. She was great at bright-plastic global-domination ultra-pop. She was a bit less great at quasi-trap club music, but she made do. And now she’s great at lightly challenging soft-thrum dinner party music.

Although Antonoff features on the album, Swift used Folklore and the sister album, Evermore, as an occasion to team up with Aaron Dessner from The National. What I find interesting is that the album is a departure for all parties. Although some would like to pigeon hole Antonoff, his oeuvre has shown nuance. While it feels like Dessner further unpacks some of the sounds explored with The National’s I am Easy to Find, as well as Big Red Machine.

With its woodsy black-and-white art, not to mention its title, Folklore advertises itself as an expected pop-star maneuver: the “back to basics” or “stripped down” revelation. But the album’s more complex than that, and does not conjure the image of Swift slumped over a guitar for an acoustic set. With the producers Aaron Dessner (of the indie band The National) and Jack Antonoff (the rock singer turned pop-star whisperer), she swims through intricate classical and folk instrumentation largely organized by the gridded logic of electronic music. Melancholy singers of ’90s rock radio such as Natalie Merchant and Sarah McLachlan seem to guide Swift’s choices, as do contemporaries such as Lana Del Rey and Lorde. The overall effect is eerie, gutting, and nostalgic. If Folklore is not apt for summer fun, it is apt for a year in which rambunctious cheer and mass sing-alongs have few venues in which to thrive.

Although it is possible to find correlations with Swift’s past albums, what previously was at the edge is placed front and centre. There has been some conjecture about whether these tracks will fit with Swift’s stadium spectaculars, this was one of the reasons she gave for her live recording with Antonoff and Dessner. At the very least, with the absence of the traditional pop singles, it is at refreshing is to hear a track like Cardigan played on mainsteam radio.

There are some albums that stick straight-away, while others take a bit more time. Djesse is one that took time to sink in. Collier’s tendency to mash-up so many ideas and sounds can sometimes be an affront to the pop senses. I think what helped was not only appreciating the tunes, but also the sonic world Collier created.  However, I feel this uncanny experience is somewhat intentional. As Collier explained in his Switched on Pop interview with his exploration of unfamilar keys and new sounds. When it clicks though there is a certain joy and exuberance that cannot be escaped.

Collier claims that Djesse is a quarantine album both in its sound and structure.

“Djesse Vol. 3,” recorded remotely, is “really a quarantine album,” he said. One of the songs, “He Won’t Hold You,” with Rapsody, “is about coming to peace with being alone. So much of my process is a solitary one. I wanted to craft a journey that described that—a mixture between very chaotic sounds that wrapped themselves around you and a simple melody that can rock you to sleep.”

However, it could also be argued that he has been building to this moment. Not only has he always recorded and produced his own music, but he also has tendency to push what is possible to the limits. Whether it be singing ahead of the beat to perform duets over Zoom, using Source Connect to capture recordings from around the world or performing as a one-man band, Collier is always innovating.

WIth The Ascension, Sufjan Stevens takes a step back to drag the listener in. There are many pop elements within all the layered synths and beats, however the mix always feels held back. Rather than sad bangers, Stevens’ presents what he labels ‘rage-bangers‘. In the hustle bustle of lockdown life and political upheaval, the album provides a point of meditation. Jon Pareles describes it as, “more metaphysical than biographical.“. While Grant Sharples argues, although it may not be the optimistic answer we may be craving for, it captures the current air of contemplation.

Though it’s still an incredible album, The Ascension better suits the cynicism of 2020. It feels banal to say that, but The Ascension isn’t exactly the optimistic salve that people may be looking for in 2020. Fans can find solace in this colossal work, sharing Stevens’ valid sentiment that, simply put, everything sucks right now.

Lost in all the sounds and starts, Sam Sodomsky compares the album to a big-budget IMAX movie.

Don’t get too hung up on the plot—just tilt back your head and watch him float.

Whether it be The Weeknd, Dua Lipa, Washington, Washed Out, The Naked and Famous, Empress Of or Sylvan Esso, there have been some great pop albums released this year. However, the one that stood out to me was Kate Miller-Heidke’s Child in Reverse. Her sense of authenticity and honesty, as well as the measured production reminds me of Lorde’s Melodrama. Whereas, Lorde’s album recounts her transition into the adult world, Miller-Heidke is looking back on life with a sense of acceptance of who she is and forgiveness for any misgivings.

It’s hard to separate Miller-Heidke’s musical theatre dalliances from songs like ‘Twelve Year Old Me’. Her storytelling is so precise and the imagery so vivid that you could transplant it into a theatrical setting with ease. Her balance of poignance and playfulness has always set her apart, and there are countless moments on this record that highlight how emotionally commanding she can be, without coming across overbearing.

Some of the tracks came out of an APRA SongHub songwriting weekend. She signed up after going through a phase of writer’s block. Miller-Heidke reflects upon the experience of working with Evan Klar and Hailey Collier and the benefit of letting the songs live through the ‘ears and hearts of others’:

It actually needs to live and breathe through the ears and hearts of others, and sometimes that can paradoxically make it sound more personal and more intimate. Sometimes other people can just help you distill what you’re saying down to an essence.

The album was produced by Klar. Miller-Heidke explains what she felt he brought to the table.

[Klar’s] arrangements are a little bit strange and surprising, but they’ve got this sparkly, airy sweetness and I think that style compliments my voice beautifully.

His aesthetic as a producer is what really drew me to his work, and made me want to work with him across the whole record. These are all sounds that come out of his computer, but there’s such a warmth and analog humanity there. They are imperfect sounds, but there is so much sparkle and air to them. What he does sounds so beautifully fresh and real to me.

I have always been aware of Miller-Heidke’s music and appreciated her virtuosity. However, I was always a little put off by her vocal gymnastics. This album changed all that for me.

We Will Always Love You – The Avalanches

This album was on the periphery for a while, with various teasers released throughout 2020. However, it was not until the album dropped that the vision for it fell into place. Although there are some great tracks, with my favourite being Wherever You Go, the strength is listening as a whole. Chris Deville describes the this as an odyssey.

Like the other two Avalanches albums, We Will Always Love You is an odyssey. Each track feels like an encounter with some new character or a scenic passageway in between outposts.

Robbie Chater and Tony Di Blasi, with the help of Andy Szekeres, stitch together voices from the past and present in an act of musical remembering. Touching on themes of contemplation and transcendence, Kate Streader describes it as The Avalanches’ own Golden Record.

In many ways, We Will Always Love You is The Avalanches’ own Golden Record, tracking their sonic DNA through an epic list of collaborators who have influenced their sound in some shape or form over the years while exploring love, human connection and our place in the universe.

As with Oneohtrix Point Never, We Will Always Love You feels more like a mix tape, a hopeful one that was needed to end the year with.

With all the talk of the ‘new normal‘ this year, the theme that seems to tie them together is the idea of ‘new beginnings’. Whether it be new collaborations, new sounds, new mindset or new approaches to performance, I feel each of these albums has offered something different.

So what about you? What albums soundtracked your 2020? Were there any themes that tied things together? As always, comments welcome.

A reflection on the music soundtracked my 2020.