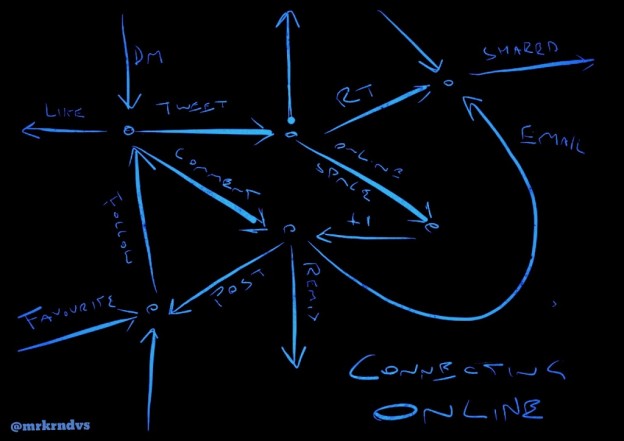 I recently wrote a post wondering whether you have to be a radical in order to be a connected educator? In response, +Eric Jensen directed me to Tom Sherrington’s post ‘Signals and Noises in the EduSphere’. In it Sherrington discusses the counter-productive nature of disruptive noise when it comes to communicating online. I tried to post a comment on the blog, but it produced an error, so I decided to simply elaborate my thoughts here instead …
In his post, Sherrington postulates that the mode of communication that we choose affects the depth of understanding that we achieve. In a ‘high quality exchange’ we are able to build upon ideas by finding common ground which includes challenging and refining our own opinions. In contrast to this, a ‘low quality exchange’ involves ideas losing their meaning as they are not given time or lack any sense of context. One of the keys, according to Sherrington, to creating a signal and not just more noise are relationships and remembering the people behind the ideas. He ends his piece with the suggestion, “When I disagree with someone or review their work, I’ll imagine sitting in front of them, face to face, before I express (broadcast) my views.” This is some great advice and says a lot about connecting online.
Sherrington’s musings reminded me of a post I wrote a few months back in response to +Peter Skillen‘s wondering as to whether the modern phenomena of perpetuating ‘one-liners’ was actually detrimental to productive change? At the time, I thought that there were many benefits to Twitter, such as coherently summing up the main idea, curating a digital identity, engaging with aphorisms and perpetuating a hope for a better world. However, I am becoming more and more pessimistic about such prospects. I still see a place for Twitter as a means for communication and I still feel that many of my arguments still stand true to some degree. I am sceptical though about the benefits of getting every teacher on Twitter, as +Mark Barnes recently posed. I think that this misses the point to a degree.
Twitter is most effective when it is built around and in addition to communities and relationships that already exist. Fine you can form relationships within Twitter, but as both Sherrington and Skillen point out, the medium is restrictive. I believe teachers should grow their own PLN, a point I have made elsewhere. Too often though, people constitute following 1000 excellent educators as developing a meaningful community. It is what we do with those people, how we interact, the stories that connect us, which make a community.
I was recently going through old +Ed Tech Crew episodes. In a 2011 interview, +Doug Belshaw explained that he limits the people he follows on Twitter to 150. He calls it a ‘convenient hypocrisy’. Interestingly, he has since reneged on this, instead now choosing to use lists to split between those people who he is open to engage with and those who he activily engages with, never missing a single thing.
Belshaw’s suggestion was a godsend for me as I was really struggling to maintain any sort of personal connection on Twitter. In my early days it was ok, I only had a few followers and could keep my finger on the pulse, but as my feed steadily grew, so did my disconnect with my communitie(s). Instead, Twitter was becoming more akin to a river in which I would dip in and dip out out of. Since Belshaw’s suggestion, I have used lists and I actually feel like I am a part of the community again, because I am able to connect with those who are truly important to me. I still have my normal feed, which I dip into, but I also have my own list which I scan through every now and again. I have found using lists is particularly important when it comes to connecting across time zones.
After reading Sherrington’s post, I am realising more and more the power of professional relationships in turning our ideas into signals, rather than just adding to the clatter of noise. I am just wondering what tips and tricks you use when sustaining relationships online? Is it about time? Or does one medium help more than another? Have you managed to develop meaningful relationships simply within Twitter? Please share, would love to know.