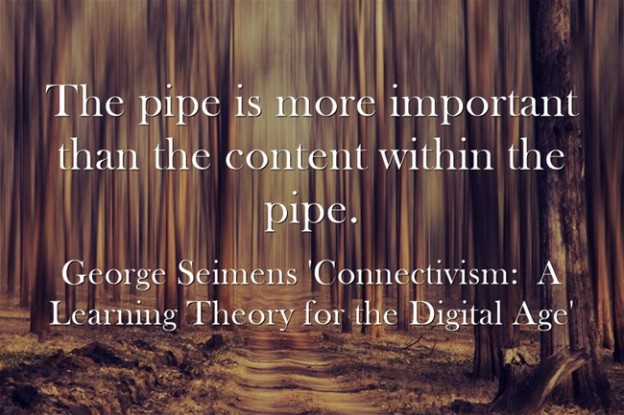 In a provocative post, ‘Another Brick in the Wall’, Peter Skillen wrote about six ‘bricks’ that he considers are combining to prevent the evolution of education into the 21st century. The bricks are that:
Peter’s post definitely left me with more questions than answers, such as: Can you really have administrators as ‘learners’ and still expect them to continue with their same roles as they are now? How do you convince students and teachers to embrace their own education, rather than accept a life of subjugation? What happens if different teachers working in the same team develop a different ‘essence’ associated with learning and teaching? Isn’t technology one part of 21st century learning, not the whole part? How do you go about educating the public in regards to the evolution in education when there are so many stakeholders out there providing mixed messages about what this means? However, the biggest question of all was whether the modern phenomena of perpetuating ‘one-liners’ was actually detrimental to any sort of productive change? Summing up the Main Idea

One of the biggest instigators in this one-line revolution is Twitter. Restricted to 140 characters per post, it seemingly forces users to clamour to the highest point of land and jump up and down to be noticed. Posts therefore often lend themselves to absurd statements, such as “5 Things Preventing You From Becoming a Billionaire” and “The Secret Video Obama Doesn’t Want You to See”. But the question is, does it have to be this way?
Having really taken to Twitter as a place to share and connect with others, I feel a little guilty as charged, as I often reduce arguments down to one-line. When I started tweeting, I initially went in thinking about how students could use such a medium to record regular reflections with their reading. I therefore made an effort to share those pertinent quotes that stood out from the texts, the main ideas if you’d like. This would always be followed by either a title or a URL where applicable. As I progressed, I started to struggle with the challenge of fitting the message into the restrictions of a 140 characters and turned to such programs as Quozio to quickly and easily capture and share longer passages. For me, this was more important than simply sharing a link or re-tweeting a previous post. My attempt was to give a meaning to the message, to provide a taste of the text, rather than just some catchy title. However, does this really guarantee to provide the reader with an entry point or simply provide a short and quick summation, providing the feeling that the idea or argument is now known and understood. I think that in some respect this whole argument is really about digital identity and how we each present ourselves online. I was once told by a fellow teacher in an annual review meeting that every day is a living job interview, you shouldn’t wait until you are sitting in front of a panel. Often the decision is made before you even speak, whether it be the examples that you haven’t got to present or the positive references that you haven’t got.
This content – tweets, posts, images – is a way of constructing your own brand, posting aspects that we associate with, marketing ourselves. This needs to be differentiated from the self-aggrandizement, where we spruik ourselves in the climb up the ladder. Instead this ‘marketing’ is a more rhizomic in nature. Although we may eventually ‘move up the ladder’, this is often a by-product, instead the real strength of our sell is in the connections that we are able to develop.  For in the modern world, it is not necessarily what you know, but the network of people you know that can help you get to a better answer. (For a great discussion of such matters, read +George Siemens introduction to connectivism.) The question this becomes about how we actually form these networks.
In a +Mashable post ‘Stop Linkbait Before It Ruins Content Marketing’, Sam Slaughter gives a few suggestions about how to best approach content marketing. He provides six different suggestions:
I think that these suggestions carry across to the development of our own digital identity. One of the prime ‘solutions’ for this situations is Twitter. It provides a medium through which you can publish regular and authentic posts. The problem though is it is easy to read like a robot, rather than like a human. However, this is often easier said than done. With so many programs and applications that easily post information to various social network platforms on our behalf, it can be be challenge. Another perspective on this whole debate is thinking of a tweet as being more like an aphorism. The Oxford Dictionary defines an aphorism as ‘a pithy observation which contains a general truth’. Although it may touch upon a truth, often the success of an aphorism is not necessarily the truth or ‘wisdom’ it provides, but rather the point of contemplation to which it often leaves the readers.  Whether it be Lao Tzu or Donald Rumsfeld, an aphorism often leads to more questions than answers. I admit then that not all tweet are deep in nature, but does that mean that the medium is subsequently flawed? I can change the way I work and attempt to influence the way other people do things, but in the end it still all comes down to choice. A choice of whether to write like a human or like a robot. A choice of whether to publish authentic ideas or simply run for the absurd. Although there may not be some gold nugget hidden within each tweet, waiting to be unearthed, I think that there is much to be gain in getting learners to think differently. I admit that Twitter as a medium does open itself up to a false sense of contentment, but this is often a fault of the the reader to think that this is dialogue stops there. For one of the tenets that seems to get bandied around in regards to 21st century skills as the notion of critical thinking. If I naively think that all you need for a Teachmeet is to “pick a date, pick a pub/library/space that is free and go ahead” as +Matt Esterman put it to me, then I would be the fool. For even though it is a free and open form of professional development, at the very least, it still requires some organisation and PR to get people there. However, Matt’s statement does plant a seed, it does at least provide the basic principles of what is required to organise a Teachment and that is important.
So to answer the question, can you really find wisdom in one-line? The answer is probably no, but you can definitely find hope. Hope for a different world, hope for a different way of doing things, hope for a more critical viewer. And sometimes that hope is all that we have.