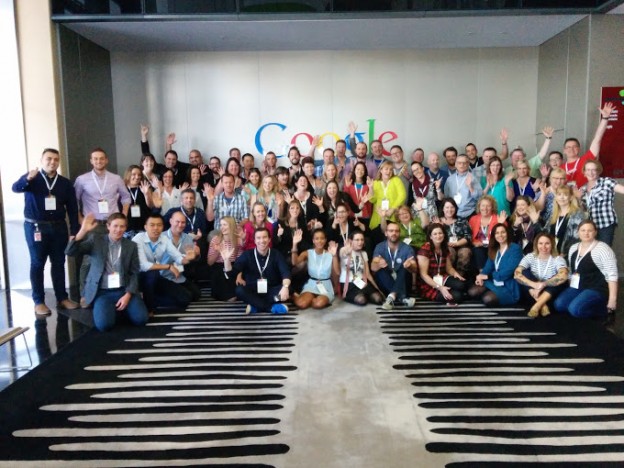 Over last few days I attended Google Teachers Academy in Sydney. There has been a change to proceedings this year with +No Tosh taking control, bringing a Design Thinking approach to the table. The focus has moved away from creating a group Google ninjas to supporting change and reform in education.

At the heart of it all is the notion of moonshots. Heralding from John F. Kennedy’s declaration that ‘we will land on the moon‘, a moonshot is an idea both with its feet on the ground, but its heads in the clouds. That is both practical and ideal. One of those dreams that people say are too hard, which we however choose to be bothered by.

Inspired by +Daniel Donahoo‘s keynote at ICTEV13, the challenge I arrived with was how do we engage the school community in meaningful dialogue in order to transform our practises to build a better tomorrow. However, I was also mindful of holding onto my idea lightly. Our first activity was to workshop our ideas in our group. My group was made up of +Riss Leung, +Michelle Wong, +Juliet Revell, +Jordan Grant and +Kim Martin, while our mentor was +Chris Betcher. What came out of those discussions was that when it comes to change there are three key stakeholders in the village: students, staff and parents.

Having already been through a process of trying to evolve teacher pedagogy via the introduction of the Ultranet, it was decided that this is not going to be a fertile space to focus on. On the other hand, it was thought that focusing on students is too often limited to a few random classes taught and becomes more like an oasis in the desert, rather than a massive wave of change. It was therefore decided that the stakeholder most left out of discussions and with the strongest voice of change are parents. This wasn’t what I had really expected. However, on reflection of all my immersions, it occurred to me that parents were often either absent or left out of the conversation. Merely told what the change will be, with little effort to explain why.

I was then faced with one of those Matrix moments where I had to make a decision. Would I position myself with cultural shift and pedagogical change, something that I am really passionate about and feel really comfortable with, or focus on engaging with change outside of the classroom, in particular parental and community engagement, something that I neither feel comfortable nor confident with. I made the decision to focus on community engagement for to me moonshots are not about being safe and comfortable, rather it is the opposite. As I suggest to my own students, find the learning that makes you feel most uncomfortable and go there.

Through this process, I ended up in small a group with +Kim Martin and +Ben Gallagher trying to unpack what exactly was the challenge associated with engaging with the wider community. We did this using hexagonal thinking. This involved writing down all of the concepts associated with the topic. We then took in turns at stringing all those ideas together, whilst at the same time opening ourselves up to critique and feedback. After a few goes we eventually came up with an agreed understanding which we recorded:

After this we returned to our original groups and worked through the ‘How Might We’ task. This involves completing a prompt: how might we ACTION WHAT for WHOM in order to CHANGE SOMETHING. The purpose of this was to come up with a clearer guide for our moonshot. After several revisions, I came up with:

How Might We ENGAGE PARENTS in a CULTURAL SHIFT to make RELATIONSHIPS and CONNECTIONS the focus of learning?

The focus on connections and relationships came out of my immersions with just about everyone stating that the purpose of education was relational, yet the reality in our classrooms is so often far from that.

From there I brainstormed a range of ideas and possibilities to solve this problem. I finally decided that the focus needed to be on engaging parents by not only inviting them into classrooms, but actually engaging them in meaningful action and including them in the classroom. For too often parents are invited in to help with menial tasks, such as photocopying or laminating. However, we fail to entrust them with a meaningful voice. This lack of agency subsequently leaves them both disempowered and on the outer. In some respect the first person that we need to buy in when it comes to schooling are parents.

My moonshot then is about going beyond parent teacher interviews, beyond grandparent morning teas once a year, beyond attending information evenings once a year and beyond simply signing readers. It is not only about getting parents involved in the classroom, but about giving them the opportunity to add value to what is going on. I left feeling that a part of the solution was getting parents into the classroom, but after further thought I think that it needs to be something more. I think that the first step is actually finding out who our parents are and what skills that they may have to give back to the community. For teachers are far from the only voice able to give back to the community, a point that I made in reference to PLN’s and listening to everyone.

I have read and heard a lot of criticism of late about the Google Certified Teacher program. For me not only was it an opportunity to work with people that I had never met before, but the possibility to challenge my ways of thinking. In the end, being a Google Certified Teacher is not a certificate, it is not something done, rather it is something that you do. It is a mindset, it is a way of approaching problems, a belief that we can change the world with that change starting at one.