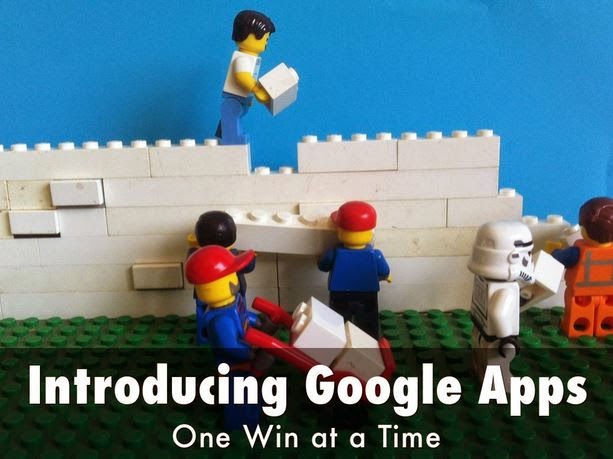 I was left challenged recently by a post from +Dean Shareski who questioned the focus of conferences on ideas and instead argued that we should be looking for connections. He made the statement that “if you leave with one or two people you can continue to learn with you’ve done well.” This has been my goal of late, to create a space where people can connect, rather than provide a list of links and ideas.
At Melbourne Google Summit, I felt I did this by creating an activity where participants collaboratively curated a guide of how to introduce Google Apps in order to make learning and teaching more doable. A point that +Bill Ferriter suggests when he states, “technology lowers barriers, making the kinds of higher order learning experiences that matter infinitely more doable.”
To me change isn’t just about bringing in Google Apps and enforcing it on everyone from above, it is just as much about the small ideas that help others buy-in to the benefits in going Google. I therefore thought that if we bring together the collective knowledge of the room that those there would not only have a great resource to take back to their schools, but a range of connections to continue learning with. For as +David Weinberger puts it, “The smartest person in the room is the room.”
What eventuated though as I roamed the room was that I ended up helping people with a myriad of other problems, from having two accounts linked to the one email account, how to use Google Groups to make sharing easier and downloading the new Google Slides app on iPad. This was awesome, for just as we need to be open as learners to new opportunities and connections, so to as teachers do we need to be open to adjusting the focus based on the situation at hand. However, would this have been the case if those in the room were not willing to raise their hand and admit that there is something that they don’t know? Admit that something isn’t necessarily working the way that it is meant to?
It occurred to me afterwards in reflection that just as it is important to leave a conference with one or two new connections, I feel that it also important to come away with a small win, a solution to a conundrum that has really been bugging you. Something personal, something important to you and your situation. This is especially the case at a technology conference where what is on offer is only the tip of the iceberg to the potential of what is possible. The big challenge then is asking, for it is only if you ask shall you receive.
For those interested, here are the slides to my presentation:
Introducing Google Apps One Win at a Time – Created with Haiku Deck, presentation software that inspires
While here is a link to the awesome presentation that those in attendance made: Introducing Google Apps – A Crowd Sourced Guide

When I saw the Google in Education Summit come up in my feeds a few months ago, I thought that it would be a good opportunity to reinvigorate the implementation of Google Apps in my school. Having had a bit of history with Google Drive, the implementation process has come to a bit of a stalemate. I’ve got to a point where everything is set up, raring to go, but nothing was being used.
Often the heart of a conference is its keynotes. There were three all up. The first was from +Suan Yeo, Head of Education in Asia/Pacific region. He spoke about Google’s place at the forefront of change and innovation. He shared various things such as Google Glass, the Loon Project and 20% time. What was missing though, is that although Google offer possibilities that were not possible in the past, such as a virtual tour of CERN via Google Glass, there are more pertinent points of innovation that still remain unaccomplished. For as +Richard Lambert tweeted when Google announced the Loon Project: The second keynote was from +Jim Sill, a Google Apps Certified Trainer from America, who spoke about creativity. He illustrated all the ways in which people create digitally these days – vine, instagram, twitter, youtube – and encouraged people to “slap a sadle on it and ride it”. He also warned that if you do not allow students an avenue for creativity in today’s day and age there are stark consequences.
The third keynote ended the summit and was from +Chris Betcher. Short, but sweet, Chris provided a snapshot of the world fifteen years ago when Google started and where technology has come to now. He suggested that the things that we are able to do now, we could do then, but with the development of the web, we are able to do them now without friction and stress.
In addition to the keynotes, one of the anomalies of the Google in Education Summit was the Demo Slam. A little like the speed sharing sessions at the ICTEV conferences, except competitive, presenters are given three minutes to wow the audience in order to get bragging rights. Some of the ideas thrown out there was using a formula in Spreadsheet to translate, using Google Docs Story Builder to … build a story and a Chrome extension, Too Long Don’t Read, to summarise various webpages. All in all, it was a great way to end the first day of the summit.
The rest of the time was made up of various presentations. Although there was a wide range on offer, I chose not to go to some of the more complicated sessions revolving around scripting and supercharging chrome, instead I focused on trying to best utilise the basic set of Apps provided through Google Apps for Education. I also realised quite early on that there were so many resources bouncing around that even if I missed out on a session, there was still plenty of information that I could go to later if I wished (see for example Chris Betcher’s fantastic collection of resources at http://www.summitstuff.com/ (now Crux Learning)).
Firstly, I attended a few sessions that focused on using Apps to connect, collaborate and store information using the cloud. Whether it be sharing a Doc or creating a community in Google+, there are so many options for connecting with others and collaboratively solving problems that it is really up to you how you use it. John Thomas summed up the benefits in his presentation by stating: “If my computer had not worked today, I would have just used somebody else’s”
In another set of sessions I looked at Google Sites. I had personally looked into Sites in the past, but really didn’t know where to start. The first session I went to was run by Chris Betcher and looked at how to create a Site from scratch, while the second session was by +Anthony Speranza and explored the potential of using Sites to create ePortfolios. The two things I came away with in regards to Sites was that it is actually easier to start from scratch rather than use the different templates, while it is also really important to have a clear purpose as to what you are trying to create and why.
Lastly, I went to few sessions exploring the implementation of Google Apps for Education. Although we have already gone through the various steps involved in setting it up, I was hoping to get a few ideas on how to improve things. Again, like Sites, I went to a mixture of sessions, one by +Mike Reading which went through the intricacies involved in setting everything up, posing some great questions to consider along the way. The second presentation was by +Corrie Barclay who gave a bit of an overview of the practical ways in which Google is used at his school.
So in summary, my three pluses were:
Connecting and collaborating. It is always great to learn with a whole bunch of new people.
New ideas. Whether it be improving search capabilities or using Google to build a site, there were so many new and exciting ideas to share back at school.
Meeting people for real. It may seem silly, but it is actually good to meet those people I connect with online in person.
My three minuses were:
Tool or Teaching? Although there was some effort to associate things with the way we learn, it always felt like the focus was on the tool rather than the teaching. (Edna Sackson has spoken about this in her blog post ‘I Want to Talk About Learning…’.)
Artificial Authenticity. There was often an attempt to provide authentic learning situations, however too often they seemed a little artificial and contrived. (I must make a massive exception Matt Limb who used a Google Form as a means for exploring different ways in which we can do research using Google.)
Finding a Seat. Yarra Valley Grammar School was a great venue, but the idea of simply turning up to the session that you wanted to go to led to some pretty cramped presentations.
My three goals:
Google Sites. Whether it be a portfolio or an assignment, I think that Google Sites has a lot of potential sharing to the world.
Improving Search Skills. I think that this is something that is both simply, but really powerful and has an impact on everyone.
Developing a Vision. For GAFE to go anywhere in the school, there needs to be a clearer set of goals as to what we wish to get out it. A part of this is spreading the load, getting more people on board.
I would love your thoughts and reflections in the comments below if you were also there or have introduced Google Apps for Education in your school.