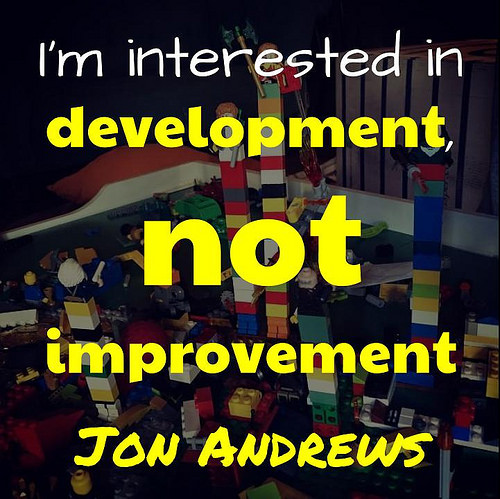 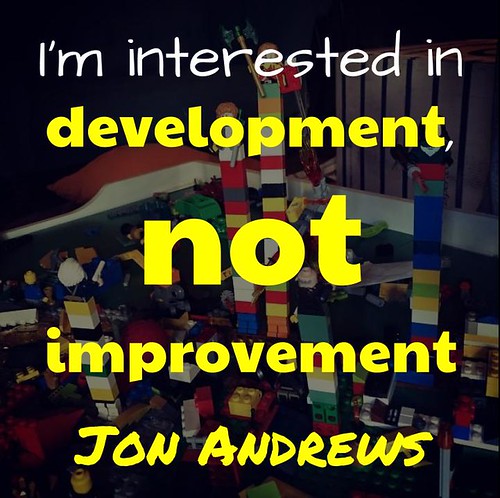 Will Richardson recently reflected on his journey in regards to blogging. He spoke about the changes that have occurred over time and how these have impacted his writing. In another post, he discussed how his authorial voice has morphed from being a ‘tools guy’ to a focus on system change. What is interesting are the actual changes to his writing. Whereas in the halcyon days of blogging he would publish 50 odd posts a month, there came a time when things changed and he wrote less.  A part of this was the change in audience and environment. More recently, he has returned to daily writing as a habit to clarify his own thinking. The lesson that stands out through all of this is that there is no single way to blog.

It can be easy to view a blog as being a set of hierarchical processes. A product organised around a series of clearly defined steps, whether it be creating a space, writing a post, organising around categories and inserting content. This is how blogging is often often spoken about, something simply to be learnt, rather than why and for what purpose.

Another similar such approach is a focus on search engine optimization (SEO). This often leads to worrying about a desired structure of the content, as opposed to the content itself.

A more useful way of appreciating a blog is as a continual act of change and development. This is not a focus on improvements towards some impossible ideal, but rather something that is continually morphing and evolving. Adapting to both the content and intent. On the one hand, the platforms and practises change. Something that Martin Weller has touched upon. However, this development is also personal and more nuanced.

When I think about this blog, there have been many iterations over time. Initially, I started out with the intent to record some of my thoughts and reflections. As I became more connected online, I started engaging in different communities through my blog, such as #Rhizo14 or #CCourses. In addition to this, I began exploring ways to involve different voices, whether it be highlighting comments in a post or curating perspectives, as well as experimenting with modes of expression, including narratives, reviews and an openness to process. On the flipside, my use of different platforms has changed overtime as I have made more sense of the various niches. After beginning with Blogger, I have since moved my main website to WordPress via Reclaim, as well as explored various other platforms.

I was recently asked by someone online how they could get their blog up and running again, beyond simply posting more often. My initial ideas were to tell a story about what you are learning right now, make something new, be the connection that gives other’s a voice or return to why. However, what matters most is where you are at right now. For example, look at the personal blog of Bec Spink. In the past she has included posts exploring classroom habits, uses of Evernote and work associated with her Masters study. Bec Spink does not necessarily post that often on personal blog anymore, but she regularly posts on the Code the Future site. Although she could dual post, sometimes development involves new spaces and new projects. As our focuses change, so to does what we write and post.

In the end, I agree with Bill Ferriter that blogging is about “reflection and making contributions and learning through thinking.” However, what this actually means in action is dependant on context. Although lists of ideas can be useful in providing inspiration, it is always best to start with your own situation and go from there. 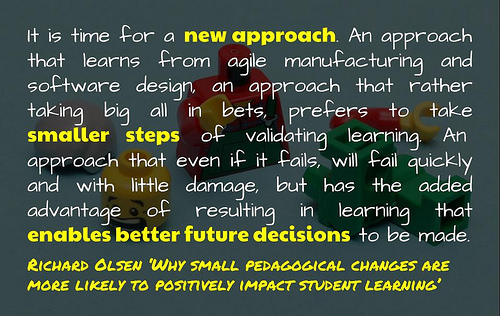 I was in an electrical store the other day waiting to be served. Standing there I looked out across the room that was full of televisions all playing the same video in order to provide some sort of contrast. As always, the high-end models stood out with their large screens and crisp view. This is somewhat obvious, of course a store is going to work out how to promote its most expensive product the best. However, I was left wondering, as a consumer is this necessarily the most useful way to measure what is the most useful product or is there more to it than that? For example, in a different setting where space is a question, the biggest screen is not always best. Also, there are times when making big purchases we feel that we need to stick with this even though our circumstances may change.

Reflecting on this, I started thinking about education and the way in which we measure success and decide on our solutions. It is so easy to get sucked into the big picture offered by NAPLAN tests and PISA results, but it feels like something is lost with this. So often such focuses portray the wider view at the sacrifice of context and diversity.

Too often we want everything to scale. The problem is that not everything works that way, that simply isn’t how change works. Instead, we need to look at solutions and strategies with the lens of our own context and environment. This is why the Modern Learning Canvas is so useful, for it provides a way of talking. Addressing such questions as the sequence of learning, the various enablers, the role of students, the expected outcomes and the overall pedagogical beliefs. With this image created we are hopefully better able to identify the smaller steps of development.

Maybe sometimes this might mean buying the biggest and the best television on display, but more often than not it means considering what works best in the various constraints within our contexts and starting there.