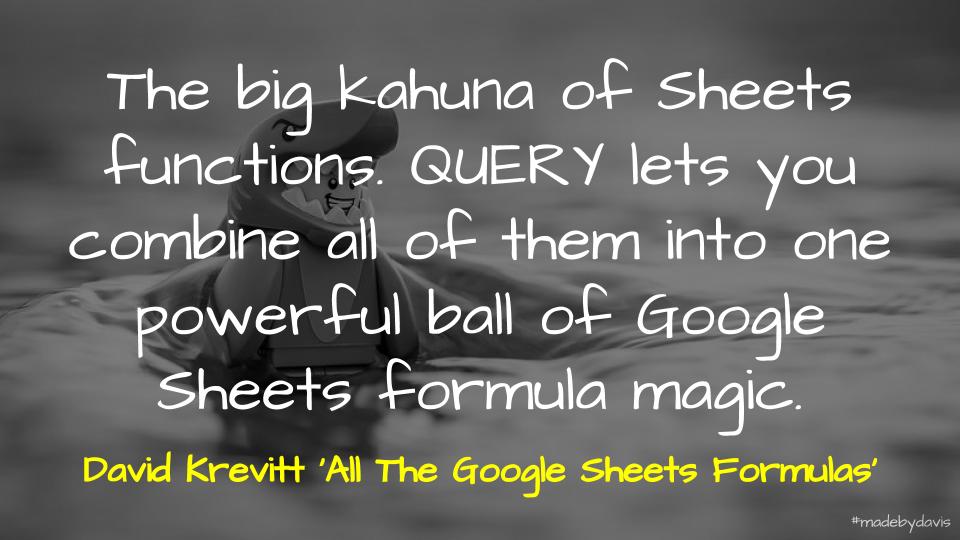 One of the challenges we have within the project I am currently a part of is that we have never had a contextual reference point for school information. Although different teams have had various lists floating around, we needed one that we owned as a whole. Added to this, the lists were often kept in an Excel spreadsheet meaning nobody ever really knew if they had the definitive version. Being an organisation that uses Google, I suggested to a colleague that we work together to develop a spreadsheet in Google Sheets and share a link with colleagues. Here then are some of the steps we have taken in developing this:

Data in, Data Out

If there is one thing that I have learnt from Ben Collins’ work, it is the importance of cleaning up your data before you do anything else. This includes avoiding merged cells, an issue we had with older versions of the data. The focus was creating a dataset with each cell telling a particular story. Other than using CTRL+ENTER to separate the different parts of addresses and locking the header, there was no formatting applied to the core data.

We were also deliberate with how we collated the information. With 40+ columns, we spent some time splitting the data into four groups – details, contacts, administration and learning – with empty columns at the end of each in case additional fields needed to be added at a latter date. Although I wanted to use Google Forms to structure all this, we decided not to because of the fluid nature of the dataset. There are also times when we wanted to be able to update the data in bulk for various reasons.

So that people  were able to access the information, a second document was set up, with the data brought in via the IMPORTRANGE formula.

This meant that the wider team could have access to the content, without messing up the original data. Although we could have restricted access to the tab or range in the source document, I was concerned that this would be fiddly to maintain, therefore chose a separate document altogether.

With the IMPORTRANGE, I imported this into a sheet and created a named range to reference this.

I tried to embed the IMPORTRANGE within my formulas, but for some reason it would not work, even after I gave permission. Therefore, I resorted to simply bringing in a copy working with this. I also thought then there is only one external call running.

Once I had my data in place, I used a QUERY to reorganise it. In addition to having a single point of reference, my argument to my colleague was that we can represent this data in different ways depending on the purpose. As David Krevitt explains:

QUERY combines all of the capabilities of arithmetic functions (SUM, COUNT, AVERAGE) with the filtering abilities of a function like FILTER.

Using the QUERY formula I created a copy of the core data removing any blank columns.

As I set the data up with space to grow, I used

WHERE C IS NOT NULL

This removed any blank rows. I also used

As this column contained the school numbers (i.e. E1234). In order to get this to work, we removed the E from the source document and used the custom formatting to add the E back to the number, while also being able to sort numerically.

In addition to the main list, I created a number of specific queries, focusing on things such as pay periods, business managers and applications being used.

Another way of engaging with the data was to focus on a particular school. To do this I created a series of VLOOKUP formulas revolving around the E number which was strategically placed in the first column of the dataset.

Another use was to create a lookup for the business managers associated with the different schools.

This involved making a new named range with the name of the business manager in the first column. I also used data validation restricted to the names in the dataset.

I also then combined this search key with the QUERY formula to display the list of schools and their core information:

In order to make the data a bit more friendly, I added some conditional formatting. The challenge was that I wanted different colours for different groups of schools. I did this using the school number as the reference:

I then used an even formula to break up the lists:

By placing the even conditional formula at the top of the list, this means that it is prioritised.

I have included this all here as a reference. I am not sure this is much use to anyone. As always, thoughts and questions welcome.