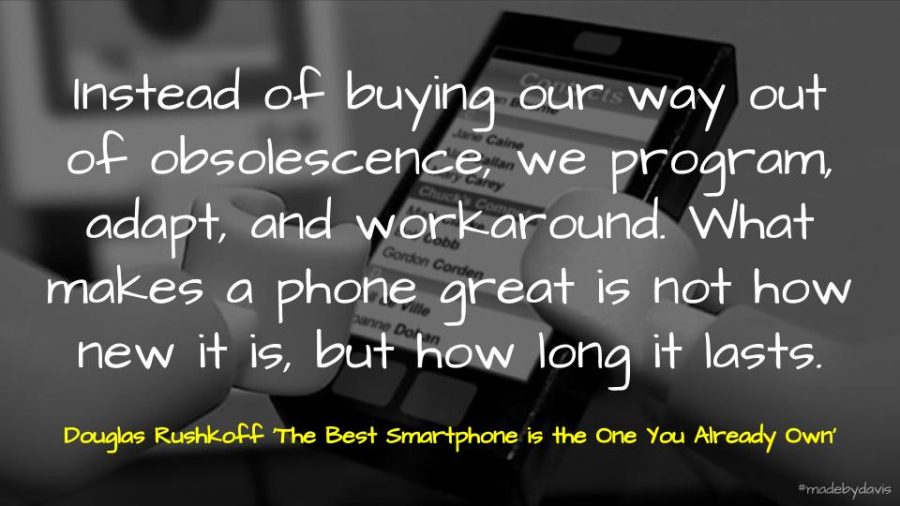 This post started as a response to a possible future of technology. However, it grew and grew, so I have split it up. This then is a response to my reading of James Bridle’s book The New Dark Age and the place of the future of the smartphone.

John Philpin recently wrote a response to a post from John Harris I shared discussing the destructive nature of mobile phones. He asked:

If we didn’t have them … what would the world look like … Can we definitively say ‘better’ ?

For me, this is such an intriguing question. My initial response was a little circumspect. In particular, I think the idea of ‘better’ is problematic and instead argue for difference. This particular change is captured by Vala Afshar in the form of emojis:

There is no doubting that the smartphone has simplified so many actions and activities. When I think of my own habits, my writing and reading often starts with my phone, whether it be flicking through my feed reader or jotting down a few notes.

This is something Adam Greenfield captures in his book Radical Technologies:

This is our life now: strongly shaped by the detailed design of the smartphone handset; by its precise manifest of sensors, actuators, processors and antennae; by the protocols that govern its connection to the various networks around us; by the user interface conventions that guide our interaction with its applications and services; and by the strategies and business models adopted by the enterprises that produce them.

I am not necessarily arguing we should ‘ban’ smartphones in schools as it often feels like such decisions are sometimes made for the wrong reasons, whether it be liability or control. Instead I am striving for more critical reflection.

Here I am reminded of Doug Belshaw’s work on digital literacies. Rather than defining it as a thing in itself, Belshaw discusses eight different elements that come to play in different contexts and situations:

Too often the focus of mobile technology in education is on cognition and communicative, rather than the critical and constructive. We are often willing to talk about moonshots and wicked problems unwilling to let go of certain assumptions and certifications.

Clay Shirky suggests that workflows need to be a little frustrating:

The thing I can least afford is to get things working so perfectly that I don’t notice what’s changing in the environment anymore.

To return to Adam Greenfield, he argues that rather than being flexible and aware of our impact, we have bought into an ethos of efficiency of everyday existence.

Networked digital information technology has become the dominant mode through which we experience the everyday.

The question is at what cost? Should students be encouraged to use the portable over a more complicated device? Is it an ‘everything now’ cloud computing that we should aspire to? As I hold my old Nexus phone, I wonder what is it we actually need verses want? What next, phones inserted under our skin? As Douglas Rushkoff suggests, “What makes a phone great is not how new it is, but how long it lasts.”

So what about you? What are your thoughts on the ‘smartphone revolution’? As always, comments and webmentions welcome.