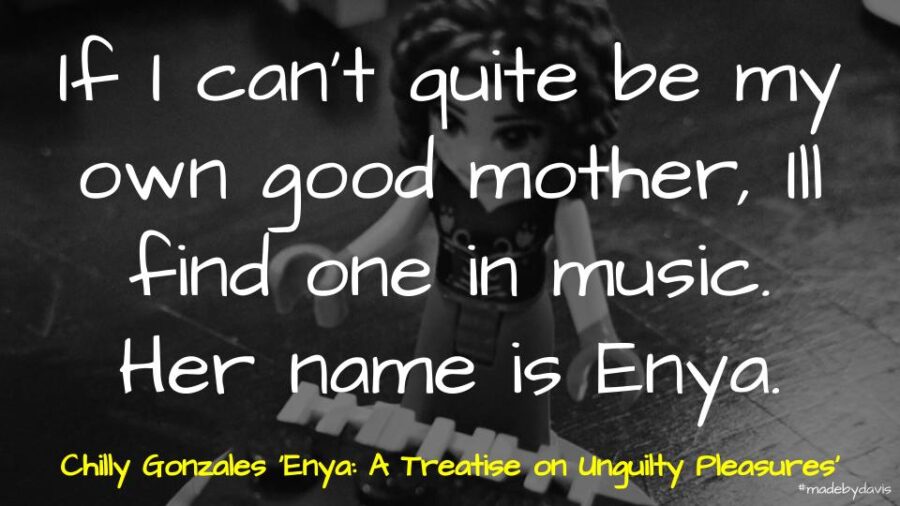 I have long been encapsulated by Chilly Gonzales and his ‘musical genius’. Whether it be his work with various artists, pop music masterclasses and minor christmas album, I have been enamoured with the way in which he manages to break music down to capture what is essential. I was therefore intrigued by a book on Enya.

I purchased the Enya: A Treatise on Unguilty Pleasures in good faith with little idea what to expect. I thought it might be some sort of technical breakdown of Enya’s work. Although I am always interested in what Chilly Gonzales has to say about any sort of music, I was not sure how interesting an extended breakdown of Enya’s music would actually be. What I had not expected was the way in which Gozanales used Enya and her music as a frame for his own memoir on music.

It was almost a joke that rose up from my unconscious. But it was my way in. With Enya as a constraint, I could finally write a musical memoir, the very book the publisher had asked for years ago.

Fine Gonzalas spoke about the Enya’s lullaby quality, the guilt often associated with liking such music, her use of the pizzicato strings on the Roland D-50 synthesiser in lieu of a rhythm track and the way in which she has managed her career by continually say no. However, often these references are merely jumping off points for Gonzales to reflect upon his own memories and experiences with music. Whether it be the relationship between harmony and melody:

Harmony is melody’s bitch, with no life of it’s own.

His desire for music that can be both serious and drop into the background:

This is what my Enya book is about. This idea of music that sounds good while you eat or party or take a bath, versus music that you give your full attention to. And you guys are having the wrong argument. It’s not that all music falls into these two categories. The goal of music should be to function on both levels. It’s like with people.

Vibrato is a bit like my formerly beloved jazz fusion: technically very difficult to learn but even more difficult to listen to. But to sign with no vibrato at ll, to let the music itself do the emotional work is the purist’s choice.

And his preference for the music over lyrics:

Wordlessness works for me. I was never a lyrics junkie outside of my affection for listening to rap. Rap lyrics are direct, playful and journalistic, standing in contrast to the impressionistic, poetic style of singer songwriters. With some exceptions I listen to music where the lyrics are in the passenger seat. No one really hears or cares what the Bee Gees are singing about, and I doubt that a single Bee Gee would even dispute that.

In some ways Gonzales’ reflection on Enya reminds me of Damian Cowell’s Only the Shit You Love podcast. Like Gonzalas’ constraint as a guide, Cowell uses his video series as a starting point from which to reflect upon music past and present. They are both musical memoirs of artists engaging in artifice. Maybe the real purpose of such texts is not to uncover the author but to provoke the reader (or listener) into considering their own thoughts and finding their own good mother in music.