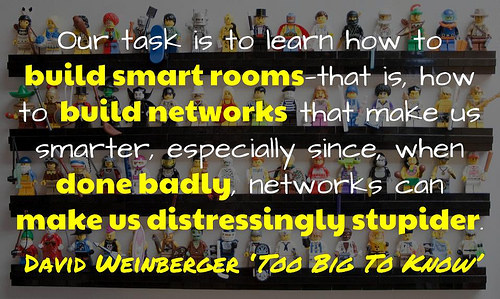 I recently presented a session at DigiCon15 about Becoming a More Connected Educator. To provide a voice for those listening, I created a Google Form asking a few questions of those in attendance, such as how they are connected, what are the biggest challenges and any questions they may have. There were a few that I addressed at the end of the session, including moving beyond sound bites and giving back. However, one question that alluded me was a ‘get connected’ for dummies. So here goes, my 10 step process to becoming connected or as requested, a getting connected for dummies:

Too often people are told, sign up to Twitter and get connected. Not only does being connected not simply equal signing up to a platform, but it misses why we might do it in the first place. In part, my initial reason was wondering what impact sharing and being open might have for learning. Although being open is still at the heart of my reason why, I would argue that now it is less about wonder and more about action, that is, how might we use the possibilities enabled through networked learning to build ‘smart rooms’ that consciously make possible new ideas and beginnings.

There are too many posts out there that discuss personalised or professional learning networks as something that can magically be done. Follow these people and hey presto you are connected. As I have discussed before, PLN’s are better thought of organically, a rhizome, with no central root system and no central belief system. Instead, there is one connection leading to another. This being said, the strength of a PLN is often deemed by how we nurture and grow it. Andrew Marcinek and Lyn Hilt reflect upon our role in regards to the health of our PLN and the need to continually reinvent it. One of the challenges is where you choose to spend your time and further your connections. For many it seems to be Twitter, others it is Google+, for some it is in spaces like Edmodo, while there are those whose connections are fostered between blogs. At the end of the day, the choice is yours. Some possible starting points are to participate in a Twitter chat, join a community on Google+, join in a blogging challenge like #youredustory or go to a teachmeet or an edcamp.

One of the keys to connecting online is finding your communit(ies). So many of my early connections were based on a sort of convenient hypocrisy. My room was made up of people I had grown up with, went to school with or worked with. Often such connections become about sharing stories about this or that, but not necessarily common interests and passions. What can be hard is that there is not necessarily a directory of tribes, rather it is something relational and discovered by listening and engaging online. It needs to be noted though, that sometimes finding your tribe might actually mean standing up, leading and connecting people around a cause.

Surround Yourself with People who Scare You

On the TER Podcast, Cameron Paterson spoke about finding someone who scares you to be a mentor. I suggest taking this a step further, I suggest surrounding yourself with people who scare you. Often we start out meeting people at conferences or following people who seem to have similar interests. The next step is actively seeking out new connections. This does not mean that you need to automatically openly engage with these people, but instead tuning in and critically evaluating the various ideas and arguments. David White describes this as elegant lurking, where the purpose is to assess credibility of those involved within the discourse.

Support Others and Give Back to the Community

Although it is fine to observe from a distance, at some point communities thrive on participation. As David Weinberger points out, “Even if the smartest person in the room is the room itself, the room does not magically make all who enter it smarter.” Too often people get caught up in the ‘original’ trap, feeling that they themselves have nothing new to say or add. However, being in the room can mean different things to different people. I think that Steve Brophy puts it best when he made the call to “be the connection that gives others a voice.” To me, giving back is about participating, being someone’s +1, paying it forward, attributing ideas where possible. Putting his spin on this, Seth Godin says in Tribes that the challenge is, “to help your tribe sing, whatever form that song takes.”

Create a Place For People to Find You

Online, it is important to own your identify before someone else does. Anne Mirtschin talks about creating a digital badge, incorporating three key ingredients: a consistent image, clear username and detailed profile. In addition to this, it can be useful to guide people to a splash page, such as About.me, which brings together all our different spaces online. Some alternatives to this include pointing to a personal blog or a Linkedin account. Although trust within online spaces can be a difficult, by at least being open about who we are and what we might stand for at least helps build trust and deeper connections.

In a recent post, Dean Shareski lamented on the lack of depth to many of the conversations he finds online. He reminisced on the ‘raw and natural tone’ that was prevalent when he was drawn to blogging ten years ago. Although idle chatter may be the glue which unites us, Shareski suggests that our challenge is to use this social capital to ‘provoke deeper, more interesting ideas’. For some this has meant moving conversations to more private mediums as Voxer and Slack. While others have taken to creating podcasts and web shows as a space for deeper conversations. Although Peter Skillen maybe right in saying that no wisdom can come be found in one-line, however it can be the stimulus for further thought.

Heather Bailie suggests that in regards to digital literacies our focus has moved from the traditional idea of read, write and react, to a focus on being able to create, curate and contemplate. For me, creation is the means that we use to collect information. Many find all their resources via various social media platforms, however, there are other means of engaging with ideas, such as Nuzzel, Flipboard, Zite, Paper.Li, Feedly and Tagboard. Such platforms offer their own means of aggregating information. The next step is making sense of it all. In regards to social bookmarking, there are many different possibilities, whether it be Evernote, Delicious, Scoop.it, Pinterest or Diigo. For a more extensive list curation tools, see Christopher Pappas’ post.

I think that Doug Belshaw puts it best when he says, “Remixing, re-appropriation and riffing off other people’s work just seems to be part of what we do as human beings.” A step beyond engaging online, whether it be providing your perspective or adding a comment, is making stuff worth stealing. Instead of worrying about how much money could be made or how people might use ideas, Austin Kleon suggests we need to, “do good work and share it with people.” In his book Open, David Price touches on four key values which he sees as being integral to the 21st century: sharing, being open, giving things away for free and trusting others. A great example of such communities of sharing, riffing and giving away are cMOOCs like the CLMOOC, Connected Courses and Rhizomatic Learning.

Be a Lead Learner

How can we really say that students and learning at the heart of the classroom if we ourselves are not learners ourselves? Jackie Gerstein argues that we should not only be leaders when it comes to learning, but actively modelling the process by continually articulating our understandings and experiences. Gerstein provides a model to support this iterative process, focusing on prototyping, testing, failing and tweaking. Blogs or vlogs can be a useful means for not only documenting this process, but also gaining precious feedback and perspectives to support growth and improvement.

I am sure that there is more to it than what I have touched on here and like Tom Whitby, I wonder why we still need to continue to talk about such topics as PLN’s. However, we are all at different points in our learning. So what about you, where are you at? Is there something that you would add to or elaborate? As always, comments are welcome. For it takes a village and that village includes you.