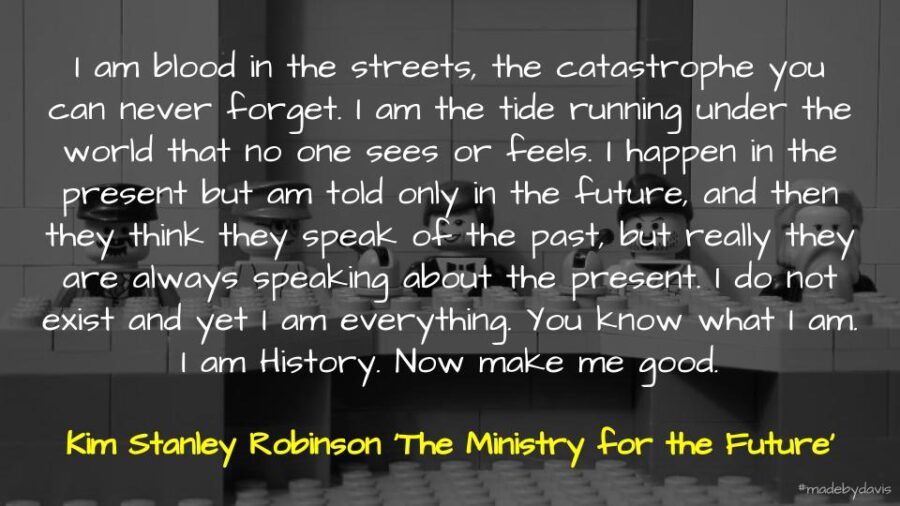 There are some novels where you get to the end and are left thinking more about yourself and the world you live in than the actual plot of the story or the characters. The Ministry for the Future is one of those novels. Kim Stanley Robinson imagines how we might save ourselves and the planet from the perils of global warming. This is not a blueprint with all the answers laid out neatly, but rather a provocation that asks many questions that need to be considered.

The story itself is loosely tied together by Mary Murphy, head of the UN Ministry for the Future, a group set up in accordance with Article 14 of the Paris Agreement.

It follows her journey in putting in place a number of steps and strategies to turn the tide on climate change. Associated with this is Murphy’s relationship with Frank May, a survivor from the extreme heatwave in Uttar Pradesh, the event which dictates the necessity for change.

However, The Ministry for the Future is really a bricolage of many different voices captured through various texts, whether it be riddles, meeting notes, interviews and accounts. A kind of docudrama. These all combine to provide different perspectives for how things could get done. The reality confronted throughout is that global warming is bigger than a single person or a particular place. It is everywhere and a problem that never really settles. Something Timothy Morton has described elsewhere as a hyperobject.

Global warming is perhaps the most dramatic example of what Timothy Morton calls “hyperobjects”—entities of such vast temporal and spatial dimensions that they defeat traditional ideas about what a thing is in the first place.

In an interview on the Marooned! on Mars podcast, Robinson describes The Ministry for the Future as a novella between Frank and Mary with everything else hanging off it. Therefore, as a structure, it challenges the conventions of the realist novel as it can never really be folded into a particular character. Instead it provides a perspective about how things could get done collectively from a number of perspectives and voices.

In the end, The Ministry for the Future is an example of near-future anti-dystopian science fiction, what Robinson has described as a shot ahead of a moving object that is the ever present. It is therefore an urgent book for now. A piece of modal schizophrenia that challenges the reader to consider what is and what ought to be. It raises many questions about topics such as violence, sacrifice, wealth, responsibility and what is actually possible. This challenge not only comes through the content grappled, which even at the end of the novel nearing the year 2050, still seems present, but also through the structure of the writing, whether it be the use of riddles to aid in thinking and reflecting or the fractured nature of the narrative that requires the reader to fill in the gaps as they go. I guess this is why Barack Obama included it in his books for 2020?

For a different and shorter perspective on the novel and the challenge of global warming, Kim Stanley Robinson presented a TED video recounting the story from the year 2071.

Review – The Ministry for the Future by Kim Stanley Robinson by Aaron Davis is licensed under a Creative Commons Attribution-ShareAlike 4.0 International License.