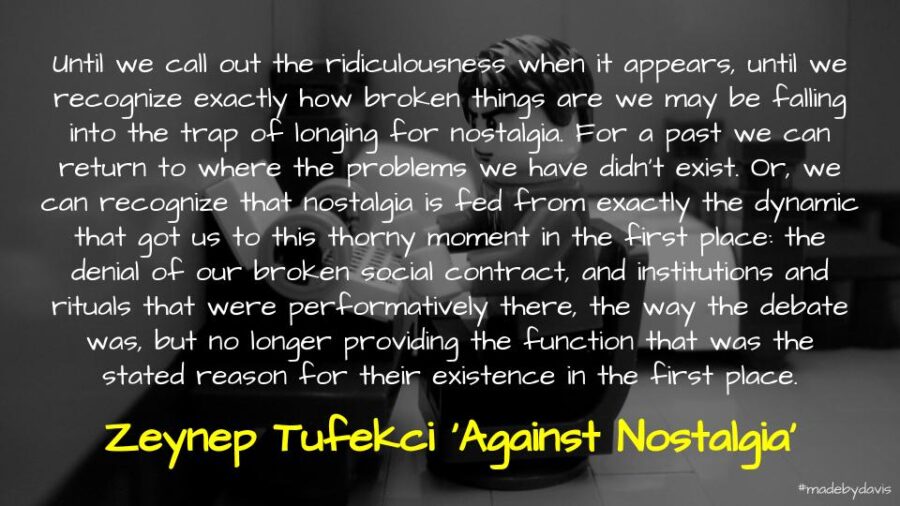 Responding to the presidential debate, Zeynep Tufekci draws on the work of William Fielding Ogburn to discuss the mismatch between a past we hope we can return to and the actual reality that has moved on. Debates worked in an era with little choice, however with so many other means of communicating it does not make sense.

Although different from the debates, this notion of mismatch is something that has been called out by the current crisis.

As students return to classes, there is a lot of discussion about what has changed and the dangers of snapping back into an old sense of normal. For Steven Kolber, the move to offsite learning has highlighted the opportunity for asynchronous learning.

A ‘build back better’ move would be to allow a portion of students’ load to be delivered remotely, giving teachers and students some space for variety in their schedule, and freedom from the byzantine and industrial timetable of schools.

I think that this opportunity is something pertinent both inside and outside of the classroom.

In my work in supporting schools, the move offsite has forced a rethink for how schools and staff are supported. Where in the past, there was a focus on in-person workshops, structured around particular topics. In their place we have been forced to explore other approaches. One of the consequences of this is that it has broken up sessions into support that is done at the point of need.

One of the things I have been doing for a while is following up support calls with a summary of how I saw things. Many take their own notes, but having my own set allows for cross-checking. Associated with words, I have been exploring a number of other ways to communicate and explain various points.

The simplest way to supplement a written explanation is with an annotated image. Although it is possible to provide clear descriptions, this presumes we all share the same language. For example, here is my online course associated with Global2 which is regularly broken up with annotated images. Although in the past I used Google Drawings to create such images. These days I use SnagIt to quickly capture and create images, especially when connecting remotely using BOMGAR.

I have taken to using GIFs to capture more complex workflows which cannot be presented in a static annotation. This was in part inspired by Jake Miller’s EduGIFs. It involves turning short screen-casts into GIFs. I have found if short enough, they can be sent by email or uploaded into a Google Doc. As with annotations, I have been using SnagIt to create these GIFs. Although I like Miller’s combination of text and image, this is not possible with SnagIt. I therefore still provide these with written instructions.

One of the limitations to both images and GIFs is that often they only capture a particular part of a longer processes. Therefore, I have taken to using Captivate to record video demos this year in something of a flipped model. This has involved:

Much of this is captured in this video from Paul Wilson and this guide:

It needs to be noted that another influence in regards to asynchronous videos has been Ben Collins. I have written about presentations before, focusing on the importance of content, delivery and supporting materials. Lately though I have been inspired by Collins’ courses and the way in which he carves out succinct narratives and breaks-up the whole into its parts. I am sure that hours of effort have gone to getting this stage.

The challenge I have with my work is two fold: to build the capacity of users, as well as develop a sustainable support processes. In addition to using images, GIFs and video, I endeavour to use de-identified data in the images that I share, this means that if somebody else has the same request that I can easily just send them the same message and image.

So that is my new normal beyond the classroom. What has it been like for you? As always appreciate any thoughts and feedback.

New Normal Beyond the Classroom by Aaron Davis is licensed under a Creative Commons Attribution-ShareAlike 4.0 International License.

4 thoughts on “New Normal Beyond the Classroom”