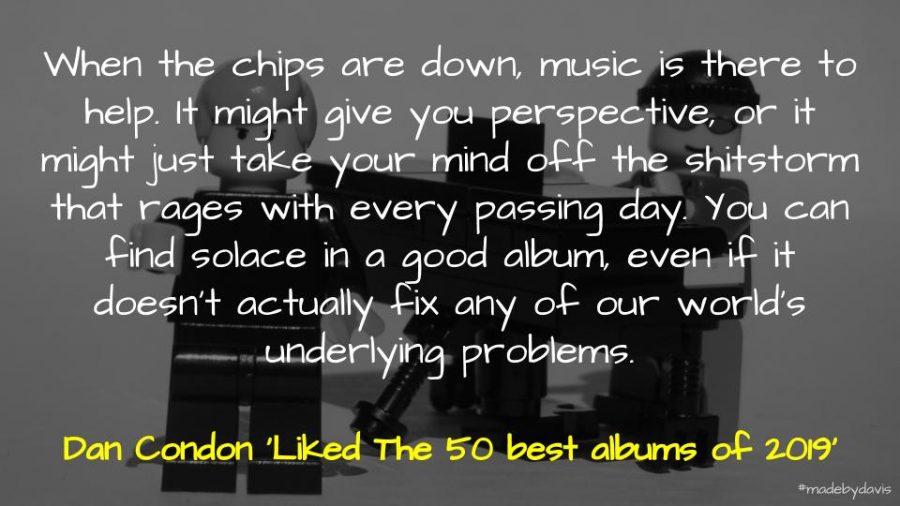 A reflection on the music that represented my soundtrack for 2019.

I enjoy the exercise of looking back at the music that stood out to me across the year. Here then are my thoughts on 2019.

Produced by Alex Burnett and David Kahne, Better in Blak has the pop hooks and melodies to quickly drag you in. However, once there Plum users this platform to challenges the listener. In songs such as Better in Blak, Homecoming Queen and Woke Blokes, she opens up about race, gender and identity. Although she tells many stories of injustice and heartbreak, the album always manages to remains positive. As Caitlin Walsh explains,

If there’s a connecting thread through the songs, it’s that you don’t need to reject the various people you used to be on your way to loving who you are now; that the ugliness, whether it’s social injustice or trolls or crushing heartbreak, can create beauty and growth if you pick them up and use them as tools, and then moving past them.

Regardless, whether her songs are critical or confessional, she conveys, if not levity, then wry humour.

For me, Better in Blak is an example of what Damian Cowell describes as treating the listener to an anchovy. Maybe this is why she abandoned her original album? There were quite a few albums of this ilk that caught my attention in 2019. That is, they hooked in the listener, while also serving up some deep questions.They included Monaigne’s Complex, King Princess’ Cheap Queen and Banks’ III.

Lost Girls is a soundtrack that stemmed from a script that Natasha Khan was/is writing telling the story of a vampire girl-gang chasing a mortal protagonist in Los Angeles. It is loosely based on the 80’s film, Lost Boys. Andrew Trendell explained that,

[Khan] wrote a screenplay about a girl called Nikki who becomes obsessed with alien sightings and befriends a local lad whose town is being terrorised by some ghostly girls on bikes. Together, they set out to solve the mystery before finding themselves in the captivity of the spooky cyclists. Sounds like the perfect John Hughes’ script, eh? Well, it started out as something for the big screen before the soundtrack took hold and the album ran away with itself .

With these cultural references, the album’s palette of rich synth sounds is also deeply based upon the past. This can be interpreted as a case of using the past and nostalgia to make comment on the present. As Ryan Leas suggests

The sound of Lost Girls isn’t just exhuming certain synth tones. It’s exhuming a past to try and clarify today, to clarify aging, to clarify how our memories and upbringings shift in and out of focus, eventually rewritten into the kind of filmic adventures we might’ve escaped through when we were actually living through those years.

I think that Joe Goggins summarises the album best when he describes it as, ‘doomy disco for dark times.’

About Us (G Flip)

I remember first hearing (and seeing) G Flip (or Geor Flipiano) as a part of the the ABC’s ‘The Night is Yours Concert‘. She played with so much energy, I was hooked. I was also intrigued when her EP came out a few months later. Although the drums were present, the power and punch was made way for the emotion of the songs. The album continues with this balance. She could easily have gone overboard with the production, but instead holds back, providing what feels like enough of everything. Overall, it carries a certain pop subtlety. As Simone Ziaziaris describes:

Her energetic tunes are packed with electric baselines, catchy synth-pop melodies and of course, vibrant punches from the drum kit. Flipo has mastered the art of pairing vulnerable lyrics about loss and yearning for love with confident (and catchy) multi-layered pop beats.

Similar to how Lorde’s Melodrama captures a particular period of her life, many of the songs document a time in Flipiano’s life when she was falling in and out of love with her girl friend. She also received help from some big names, including Ariel Rechtshaid (‘I Am Not Afraid’), Justin Tranter (‘Stupid’) and Scott Hoffman (‘Two Million’). This reminds me of Missy Higgins talking about her experience of working with different writers on the Inspired podcast. I am going to assume that is how the music industry works?

Rather than hooking the listener in with sweet choruses and succinct pop songs, Norman Fucking Rockwell is an album which washes over like waves lapping on a beach. Before long, you are lost within a world. I think Sam Sodomsky sums it up best, saying,

The album weaves love songs for self-destructive poets, psychedelic jam sessions, and even a cover of Sublime’s “Doin’ Time” through arrangements that harken back to the Laurel Canyon pop of the ’60s and ’70s. Throughout, Lana has never sounded more in tune to her own muse—or less interested in appealing to the masses.

In an interview with Joe Coscarelli, Del Rey provides some insights into the choice of Jack Antonoff as producer and why it is time for protest songs. There is something ironic about Antonoff’s inclusion. Some may call out another failure to present anything original, yet Del Rey’s attempt at raw honesty seems prime for collaboration with the ‘superproducer’ (what is a superproducer?) As Antonoff once stated in an interview with Zane Lowe:

I want to work with people because they think that they are geniuses, not because I want make the albums that they have already made

Although Ann Powers questions her reference to noir and where Del Rey sits within the panteon of other female artists, such as Joni Mitchell, Fiona Apple and Tori Amos, I think the success of the way in which is drags you into a world. As Powers’ describes,

The sensitivity and compassion Del Rey expresses in these songs really resonates not in its straightforwardness, but because of all the pings it sets off in the listener’s brain, each one hitting like a nearly-erased memory. In “Mariners,” she deflects the Elton John comparison its piano part demands (“I ain’t your candle in the wind”), only to build to a chorus that seemingly echoes the Oscar-winning theme from a classic 1970s disaster movie (Maureen McGovern’s magisterial “The Morning After”) and, in its warm but uncanny multi-tracked vocal hook, the synth-kissed love songs that brought Leonard Cohen back from obscurity in the 1980s.

Coming back to Antonoff, it is also interesting to consider that this album was released a week after his other significant production effort for 2019, Taylor Swift’s “evolutionary rather than revolutionary” Lover.

Mark Ronson’s Late Night Feelings has the usual polished rhythm and feel that you would expect from Ronson, however gone is the sense of fun present in past tracks such as Bike Song and Uptown Funk. Instead we are left with a collection of ‘sad bangers’. As he explained in an interview with Jordan Bassett,

Ronson and the Parisian actor Joséphine de La Baume divorced in 2018 after five-and-half years of marriage. “The entire period of a year – a year-and-a-half, maybe two years – was kinda like… it was just a bit covered with this grey cloud over it,” he says. “Some days it’s fine, some days it’s better – and there’s still good shit that happens. It’s the first time I ever put my own emotions, or what I’ve been going through, out there in a record. I almost didn’t have a choice not to make a personal album because it was so all-consuming going to the studio and trying to make something fun or groovy. As nice as it might have felt in the moment, the next day I’d listen to it and it would feel completely inauthentic.”

For Ronson, the contrast of the upbeat nature of the music with the melancholy of the lyrics is something that harks back to the blues.

“I think it’s the combination of being able to move to something that’s melancholy,” he explains. “Obviously having a dance beat and a really relentlessly upbeat song is kind of fun, but then you’ve got everything firing in the same direction. I like the rub between the upbeat rhythm section and the longing in the vocal. All American music, really – all soul, American R&B, everything – comes from the blues. And the blues was invented to express dissatisfaction, heartache and lament, so it makes sense that it would work in, like, a disco. There’s a sadness and melancholy in a lot of my favourite dance records.”

Peyton Thomas also places it within the tradition of ‘Sad Girl‘ genre,  where the portrayal of female sadness is actually a strength to be recognised.

Late Night Feelings is not the first recent record to treat the sadness of women as a healthy response to all manner of hurt. It is, however, a worthy entry in this still-developing pop pantheon, authentic and honest in its rendering of many shades of feminine sorrow.

Some critics have questioned the seemingly hit and miss nature of the album, however I feel it is one of those albums where the whole is greater than the parts. It can be easy to get confused at supposed fillers like Knock Knock Knock, but like Fitter Happier on Radiohead’s OK Computer, such tracks serve a wider purpose in creating a particular world.

I think this also touches on the reality that Ronson is first and fore-mostly a DJ. When discussing the making of Covers, Ronson once stated that his intent was to make music to DJ to. This album is a continuation of that. In some ways it can be heard as a set in its own right. Although it isn’t as blended as something like Madonna’s Confessions on a Dancefloor, moments like the bridge in Late Night Feeling or the constant of the bass throughout give it that feel.

I have completed this activity for a few years now. What is interesting is that a theme always seems to present itself. 2017 was Jack Antonoff, 2018 was musical reimaginings. This year it was about the female voice. Each of the album’s was driven by a strong female presence. What is intriguing though is when you dig into each of the album’s, there are still a plethora of men producing? Alex Burnett, Charles Scott IV, Jack Antonoff and Mark Ronson. Other than those who self produce, where are the female producers?

So these are my highlights for 2019, what about you? What were the albums that stuck with you? As always, comments welcome.

Music of 2019 in Review, or The Year Girls Ran the World by Aaron Davis is licensed under a Creative Commons Attribution-ShareAlike 4.0 International License.