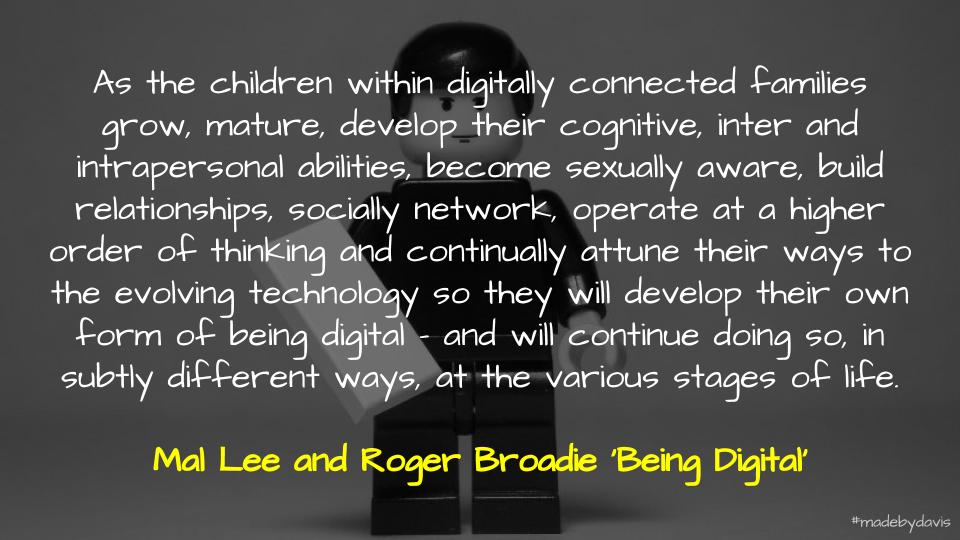 Often we talk about ‘being digital’ but what does this imply in reverse? What might it mean in today’s day and age to be analogue?

In a recent post reflecting on Nicholas Negroponte’s book Being Digital, Mal Lee and Roger Broadie discuss what it means to ‘be digital’. The authors reflect on some of the changes, especially in regards to learning. They also explain the fluid nature of ‘being digital’.

As the children within digitally connected families grow, mature, develop their cognitive, inter and intrapersonal abilities, become sexually aware, build relationships, socially network, operate at a higher order of thinking and continually attune their ways to the evolving technology so they will develop their own form of being digital – and will continue doing so, in subtly different ways, at the various stages of life.

This all begs the question, if being digital is such a thing, what does it mean to be analogue in today’s world? Assuming that is the opposite? Is it even possible anymore?

I recently watched the film adaptation of Into the Wild, a story about a student, Christopher McCandless, who goes off the grid after finishing his tertiary studies. In some respects, it reminded me of Jack Kerouac’s novel On the Road, where the main protagonist wanders around search of a sense of self and identity.

What was interesting was comparing it with Dave Eggers novel The Circle. A fictional social media company that makes the argument for radical transparency. As things unfold in the world that Eggers creates, it becomes impossible for anyone to go off the grid, to start again, to forget the past.

SECRETS ARE LIES SHARING IS CARING PRIVACY IS THEFT

Through the power of the crowd, there are no more ‘Alexander Supertramp’s’ (the psuedonym taken by McCandless), there is only truth and power.

The era of false identities, identity theft, multiple user names, complicated passwords and payment systems was over. Anytime you wanted to see anything, use anything, comment on anything or buy anything, it was one button, one account, everything tied together and trackable and simple, all of it operable via mobile or laptop, tablet or retinal. Once you had a single account, it carried you through every corner of the web, every portal, every pay site, everything you wanted to do. TruYou changed the internet, in toto, within a year.

What then does this all mean for being analogue? For identity? For memory?

There are some in Silicon Valley, like Tristan Harris, who talk about ‘aligning technology with humanity’. If only we have a little more humanity in it all then everything will be ok. The problem with this is that this perpetuates the belief that technology and humanity are somehow distinct and can be harmonised.

In a recent interview, George Seimens suggested that our focus should be on ‘being skills’. Jenny Mackness summarises this conversation as follows:

Technology can ‘out know’ us, artificial intelligence is taking over human roles, and that in the future technology will become a co-agent rather than an enabler; you, me, colleagues, algorithms and robots will all work together in a techno-socio distributed learning model. George tells us that learners (humans) need to learn how to participate in this and that this will be through ‘Being skills’ which, as yet, machines can’t succeed at. He says we are necessarily entering a ‘being age’ because the technological systems around us are more intelligent than we are.

What is intriguing about this is that although Seimens tries to focus on what separates us, we are led back to the work of mindsets and behaviourism. Interestingly, Mackness extends her reflection by exploring the notion of living things and machines. Maybe then being analogue is merely living?

Just as Steve Brophy stops and questions 1:1 computing, I think that sometimes it is important to stop and consider the world that we are buying into. Today this meant stopping and wondering about being. As always, questions and webmentions welcome.

Being Analogue by Aaron Davis is licensed under a Creative Commons Attribution-ShareAlike 4.0 International License.

14 thoughts on “Being Analogue”