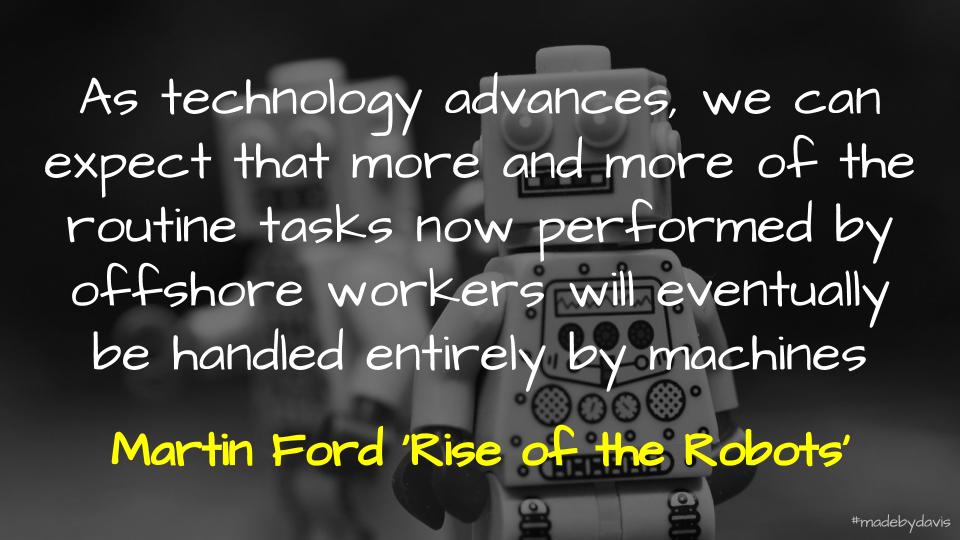 The future may well involve automation, but the path to getting there is not so clear.

In Rise of the Robots, Martin Ford suggests that:

As technology advances, we can expect that more and more of the routine tasks now performed by offshore workers will eventually be handled entirely by machines

His point is that offshoring is often a precursor to automation. It can be easy to see such conclusions as linear, straight lines with an inevitable end. However, I have had an experience over the last few weeks which highlights where we are at and where we still have to go.

The scenario in question involved changing to a SIM only contract as my plan with a handset had finished. My first step was to go into the telecommunication’s store. This is what I have always done. So I waited for near on half an hour in their newly designed space, with couches and screens everywhere, only to discover that they just sell products. If I wanted to change my plan then I would have to go online.

So I went online to my provider and looked around my account information. I could find how to add a range of useless services that would incur an additional.monthly fee, but was unclear how to adjust my plan.

Confused, I called the helpline. I followed the automated triage process. Got through to someone who said that they could not help me, explaining that they would put me through to someone who could. After waiting for thirty minutes, I hung up, fearing that I had been forgotten, and called the number again. This time i got someone who asked a few more questions to ascertain my situation, only to inform me that I had to go online if I wanted to change my plan.

So with fresh eyes I returned to the website. The more I clicked around, the more I bumped into the option to chat with somebody. I have had mixed results with this in the past. I was once told by a chat operator that global roaming had been added to my account only to discover once overseas that I had no connectivity. I clicked the button.

It opened a new screen and indicated that somebody would be with me soon. So I went back to searching the web and checking back every few seconds. I must have missed the notification and noticed that the operator had said hello, asking how they could help. I quickly punched in a “hello” back and then typed a second message outlining my situation. The messages were pushed through to the chat stream. I waited a minute only for an automated message to appear saying that the session would be ending due to my failure to respond.

I therefore opened a new chat window and went through the whole process again. This time I was more vigilant. A name finally appeared. I explained my situation. They verified my existence. We went around in circles, seemingly asking the same question over and over. Eventually it was ascertained that I wanted to change my plan. The operator shared a link to the plans. Once I identified which plan I was interested in, I was informed that I would be put through to someone from marketing. Ironically, while I waited the operator asked me who I was with for my internet. As if they did not already know from the 30+ cookies associated with their site. I politely explained that, with the quality of service provided, I would not be moving my internet to them. I received another token apology for more experience.

I was finally forwarded to a new operator. We spent another five minutes with civilities and again verifying who I was. After again clarifying what I was after, the operator explained that I needed to follow the steps on the page with the plan. I began clicking through. Even though the main page indicated that the plans were for those currently with Optus or coming from elsewhere, all the questions implied that it was designed for new users, especially the delivery of a new SIM. I asked Operator No.2 a few questions. They had no idea what I was talking about. This confused me, surely they would have a page for them to use in order to walk me through the process? Frustrated with the time I was taking, obviously throwing out the statistics, I was passed onto a third operator.

By this stage i had spent an hour trying to work things out, having spent an hour before that putting my children to bed. I explained that the situation was ridiculous. I questioned the fact that they continue rolling over phone plan which include a monthly handset charge even after the handset has been paid off (I know, buy the handset outright). All I got was the usual canned response. I ended up deciding to fill the form associated with the change of plan in to the best of my ability. It all seemed to be complete and my friendly operator clarified a few random questions until I gave up assuming everything was done.

I received an email indicating that the contract had been processed. I was unsure what was going to happen next as there was a mention of a shipping time for the new SIM card, even though I already had a SIM card. I decided to wait and see, unable to get a clear answer from the chat operator. However, I was surprised when I received an email and text message (just to make sure) requesting that I ring them.

I called back. After waiting 30 minutes, I hung up as i had work to do. I then called back at another time. I waited an 1:15 to speak with an operator. Only to find out that they were having trouble loading my file as the computer crashed or something. After waiting for another five minutes I was asked for my information to verify who I was and I was done. Even though I had provided this online, apparently they could not process the application until I had given this information verbally.

I recognise that the future will be automated. However, I am sceptical that it will be seamless transition. I wonder if what is lost in this rush to get everyone to go online is why automate in the first place? So often it is taughted as an improvement in efficiencies, but in the case of the telecommunications company, it seemed to be focused on profit. Surely this is why they allow plans to keep on rolling over once they have finished (I know someone who forgot to reassess for five years). I can imagine a number of ways that automation could be good for customer service, the same way bots and other forms of artificial intelligence are used in platforms like Slack. This could include letting you know when your plan is coming to an end, converting you to a different plan or reminding you when your bill is due. To be fair, I could probably create sone of these myself and maybe that is where the future lies.

So what about you? Have you had any interesting experiences with automation? As always, comments welcome.

When Automation Goes Awry by Aaron Davis is licensed under a Creative Commons Attribution-ShareAlike 4.0 International License.

6 thoughts on “When Automation Goes Awry”