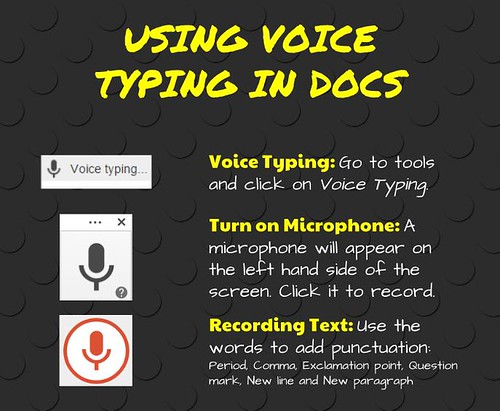 So often we perceive innovation as being about the big things. However, sometimes it can be something small which can have the biggest impact. Last year, Google released voice typing for Google Docs in Chrome. This had been available both via the iPad app and using Google Keep. However, it was not something built into Docs on the web.

While conducting a writing conference in intervention the other day, I decided to open up a Doc and give it a go. As we read through the handwritten document, it recorded the text. This meant that together we could then add comments in the Google Doc and begin the editing process there. Several other students showed quickly hovered around with interest.

To record, you simply go to Tools and click on Voice Typing. Once expanded, you simply click on the microphone to turn it on and off. There are also a range of cues you can use to add punctuation, such as period, comma, exclamation point, question mark, new line and new paragraph.

For some, such as Clive Thompson, voice recognition technology has the potential to dramatically change the ways in which we consider handwriting and writing. I guess only time will tell.

I was recently asked about the ability to record and transcribe interviews on the computer. Naomi Barnes said that Docs was a possibility if the recording was clear enough. This reminded me of something that Alan Levine did a few years ago, where he recorded both the audio and a transcript at the same time. Along with YouTube’s automatic transcription service, both these solutions still require some sort of human intervention in reviewing the finished product. It is for this reason that many who I asked recommended doing your own transcriptions. Ian Guest mentioned that you can get foot pedals that plug into the computer to start and stop recordings, while Clive Thompson said that if you don’t transcribe yourself there are services like Rev which you can outsource to. Testing out another option, John Johnston demonstrates what Happy Scribe can do.