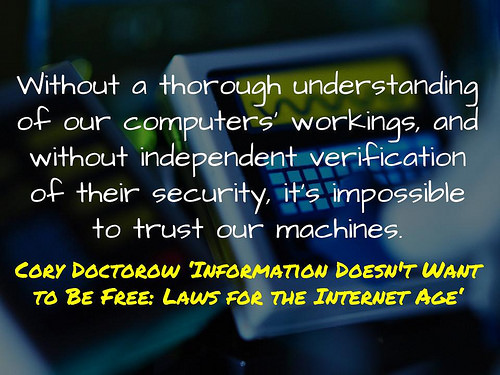 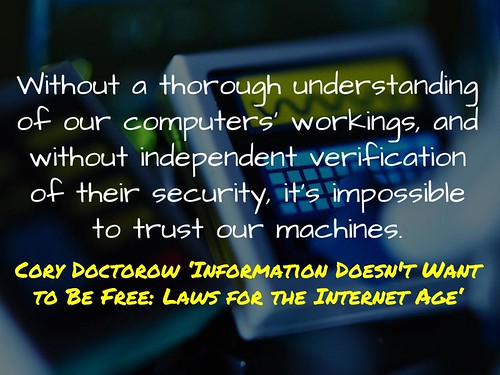 I remember when, while still studying at university, I attended my first educational conference. It was the History Teachers Association National Conference. Being new, I had no idea how to choose what sessions to attend. That is how I ended up in a session reviewing the recent changes to the senior syllabus. To add to matters, I walked in late and the session had already started. There were comments being thrown around left, right and centre. On one hand I felt lost and out of place, but on the other hand it demonstrated to me what was required, both in regards to appreciation of the complexity of the curriculum, as well as the work I still needed to do in order to get my head around the topic. I had a similar feeling reading Cory Doctorow’s book Information Doesn’t Want to Be Free – Laws for the Internet Age.

Author, blogger and activitst, Doctorow provides a vision of now. Along with critics such as Quinn Norton and Audrey Watters, he captures a dystopian side of technology too often overlooked in the mainstream media. Although there are those such as Sherry Turkle who highlight the negative impacts of technology, Doctorow focuses on the choices that are so often dictated onto society by governments and large corporations.

Through his investigations he touches on how coding works, including ways it can be broken, and why the use of digital locks, hidden code and DRM is a problem, not a solution. He talks about how with access to the biggest audience machine ever a little bit of fame can go a long way. However, this can also lead us into the trap of handing over rights to our work in the name of popularity and promotion. Doctorow also addresses the place of copyright in a digital age, exploring aspects, such as censorship, remixes, national firewalls and the spread of ideas.

Information Doesn’t Want to Be Free: Laws for the Internet Age does not make the claim, like some, that ‘Google’ is making us dumb, rather that corporations are creating a world that restricts our freedoms and limits our privacy. The concern is not the strangers online supposedly waiting for prey to stalk upon, but 1’s and 0’s mined unbeknownst to us by online companies. Although there is a lot of fear associated with all of this, it does not have to be that way and Doctorow is keen to point out that there is still hope. The question though is what tomorrow are we willing to fight for? This is an important read not only to appreciate the world that we are in, but to build an awareness of the impact of the choices made either by us or for us each and every day.

Here is a collection of quotes for a different perspective on the book:

While for those interested in Doctorow’s ideas, I recommend the following videos:

REVIEW: Information Doesn’t Want to Be Free by @doctorow by Aaron Davis is licensed under a Creative Commons Attribution-ShareAlike 4.0 International License.

10 thoughts on “REVIEW: Information Doesn’t Want to Be Free by @doctorow”