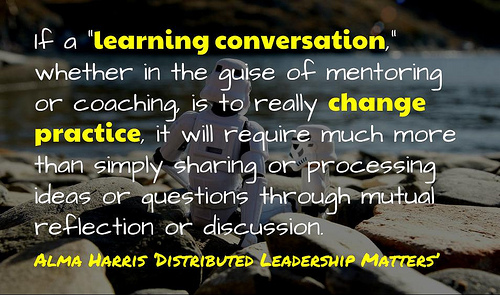 When I reflect on 2015, it probably wasn’t what I hoped (is it ever?) Taking on a more explicit role in regards to leading and teaching ICT, I had lofty dreams of being able to implement change when it comes to using technology in the classroom. As I have stated elsewhere, ideals are not always ideal.

Although there were some wins, such as the use of iPads in Year 4 through the use of Adobe Voice and students engaging in a virtual learning community via Global2, it felt like there were more failures than successes. For example, I thought that actually teaching Year 6 ICT would allow greater possibilities to introduce things such as Google Apps and blogs. However, when such platforms and processes are only used once a week, it is hard to develop much of a habit. The result was that much of my time was spent doing seemingly frivolous tasks such as resetting passwords. A problem that had hindered much of my work with the Ultranet, back in the day.

I think that Gary Stager is onto something when he says that technology needs to go beyond mere engagement to get to a point of boredom. It is at this point that learning, not a device, becomes the focus. Sadly, I don’t think that many of the students were even engaged, let alone bored, with the use of technology. They were more annoyed at the disruption from the usual cut-and-paste posters and handouts.

This ‘failure’ has led me to realise that for technology to succeed more than anything else it takes a team. I had thought that I could lead such change through hardwork, however, as Michael Fullen explains, I was left in a state of inertia. With little clarity of vision from above and support to go forward, nothing really moved anywhere. The challenge then moving forward is not necessarily that of ideas themselves, but building capacity to actually drive the ideas forward.

By ‘building capacity’ I do not mean indoctrinating others in regards to what I deem as ‘best practise’, instead I mean the ability to actively support others to identify areas of innovation in regards to teaching and learning. In some respects this is just as much about supporting students to take action and drive their own learning. In part this is also about continuing to build my own capacity as a teacher, coach and mentor.

Although I have started out on this journey, exploring the use of the Modern Learning Canvas to support the development of digital pedagogies. I still feel that there is so much more to do, together.

So that is me, what about you? What is your one word? Do you have any thought and advice to support me? As always, comments welcome.

One Word – Capacity by Aaron Davis is licensed under a Creative Commons Attribution-ShareAlike 4.0 International License.

8 thoughts on “One Word – Capacity”