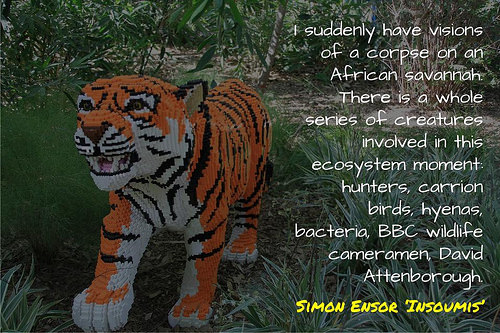 In a recent episode of Future Tense, Matthew Smith presented a report on the dingo fence that stretches across south-eastern Australia. The fence was developed to keep out dingos out of the fertile part of the Australia. However, researcher Euan Ritchie explained how the desired purpose does not always achieve the intended outcome. For although the fence was designed to help protect sheep flocks, in eliminating one of the environments natural predators, it has led to an over-abundance of wild animals and a subsequent decrease in vegetation. As Ritchie explains,

With dingoes being absent from ecosystems we have more cats, we have more foxes, we have too many kangaroos, we often have feral goats, pigs et cetera, and they all have their own impacts.

In addition to this, the fence – stretching over 5000 kilometres – costs roughly 10 million dollars a year to maintain.

The answer being purposed to improve the state of things is rewilding. Already used in Europe and America, the practise involves reintroducing top-level predators into an ecosystem in order to restore function back to the landscape. One of major concerns comes from farmers who such things as the dingo fence were created for. There have been different strategies and solutions used to quell the impact of predators on livestock. They include: large guardian dogs, such as maremmas, smaller fencing to protect young calves and lamb, as well as reimbursement for lost  stock. What is interesting is that it been argued that due to the decrease in herbivores and increase in vegetation, properties with dingoes are actually better off in a net sense. Scientists are therefore proposing not to simply remove the whole fence, but to move parts of it in order to monitor and manage the change.

This discussion of rewilding got me thinking about education. In a recent post, David Culberhouse discussed overcoming the barriers and pushing past procedures. As he explained,

The problem is that at some point, like with all obstacles or walls that we create, the danger we are trying to keep out finds a way in.

Maybe then what is needed is a rewilding of education. So often structures are put in place to support instruction and schooling. A point Greg Miller touches on in a recent post. Practises that are then measured and maintained through standardised tests. The learning landscape is then left barron with little beauty and a lot less care.

What if we removed the fences, where instead of focusing on managing experiences for students from the top on down, we co-create experiences with students from the bottom up. Supporting students to be what Ewan McIntosh describes as problem finders. This does not mean simply leaving students to their own accord, instead like the guard dogs protecting the flock, support them in the maintenance of their learning portfolios to add discipline to the process. For those learners in need of smaller fences, provide scaffolding in regards to the development of core literacy and numeracy skills, especially in early years. While provide focused assistance to those who need additional guidance to aide their learning.

Some see all of this as a risk of sending the lamb to the slaughter. Condemning students to an education of ‘stuff‘. The problem is that we are doing that now. With the research done, it is often already decided what is important to know and do, rather than placing students in the driving seat of their learning.

Some see things like Genius Hour or 2-hours allocated to inquiry as the solution. However, as Audrey Waters questions,

Don’t we need to think about how to re-evaluate 100% of time in order to make school more student-centered, not simply fiddle with a fraction of it?

This is not to say that this is simple or without risk. Just as the proposal with the dingo fence is to move a small part of it and then reassess, one approach to rewilding education maybe to take small incremental steps. Set a goal, take action and then reassess. Starting with 10%, as Will Richardson has suggested. A useful strategy in support of such change is the IOI Process which provides a series of tools that helps discuss not only where you are at, but a map of where the next step may lie.

Maybe you don’t think that this metaphor works? The strategies are too simple or lack nuance? You don’t think that learning is the top predator? That could be so. However, what is important is to continually reimagine and ask the question, what if? Such ideas may not be right or necessarily work, but they promote more discussions and help build towards a brighter tomorrow.

I will leave last word to Gillian Light who, on reflecting upon the need to lead digitally, summed the situation up nicely:

School doesn’t have to involve students sitting in straight lines listening to an all-knowing teacher. Because learning certainly doesn’t involve that.