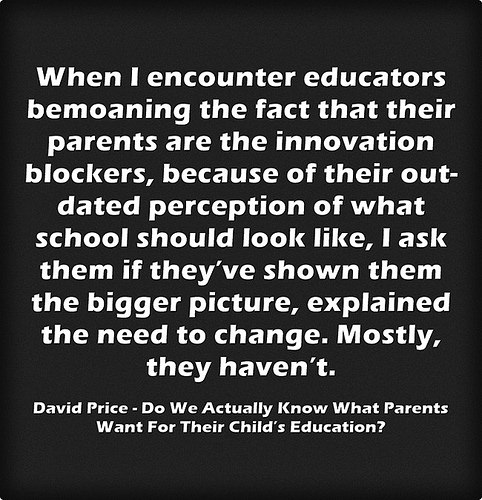 During a recent ICT planning session the age old argument was raised again, where is the promised digital revolution that everyone promised? Really, it was argued, we are not doing anything different than what we did in the past. For example, the new Digital Technologies curriculum, awaiting endorsement, calls for a focus on coding. However, it was argued by some members that this is no different to the focus on Logo in the 80’s. In response, one participant suggested that one significant change technology has brought about is the ability to communicate with parents on a more regular basis. Instead of being restricted to the usual diaries and school newsletters, technology allows schools to foster deeper connections between home and school.

I agree with Eric. I think that technology has the ability to make listening to voices both in and out of the classroom more doable. The question though is whether such messages that are enabled are always worthwhile. In his book Open, David Price discusses this problem, saying:

Most parents, I believe, would prefer to know about their child’s confidence, their sense of well- being, their capacity for independent thought, or their ability to ask critical questions – the language of milky coffee. Instead, parents only know the language of black coffee, because that’s all they hear. Are they on target for good grades? Are they getting enough homework? What were their last test scores?

For whatever reason, schools often use new mediums to provide same old information. Complaining that parents do not read printed reports, some believe that making them accessible digitally somehow makes them different. I am not so sure. Although it can be easy to blame parents, if we do not give them a reason to engage, can we blame parents when they do not show any interest?In a conversation about education reform on Twitter, Alan Thwaites shared a documentary video including the usual voices, such as Sir Ken Robinson, Tony Wagner and Thomas Friedman.

Education Documentary Clip from One Potato Productions on Vimeo. Although many of the arguments were not necessarily new, what stood out to me was the discussion of High Tech High and project based learning. For the culmination of the project, students had to present what they made to the community at an information night. I know showcasing student work is nothing new, but there just seemed to be something different about what was happening in the video. Maybe that it seemed more authentic than usual, with students enthusiastic about their work. Or maybe it was the space that was created. Whatever it was, parents seemed to be genuinely interested.

Coming back to the planning session, there were many quotes bandied around to create conversation and spur us on. One that stuck out was Michael Fullen’s discussion of technology in Stratosphere, where he states:

New developments must be:
i) irresistibly engaging (for students and for teachers);
ii) elegantly efficient and easy to use;
iii) technologically ubiquitous 24/7; and
iv) steeped in real-life problem solving.

What stood out in this quote was the reference to students and teachers in the discussion of ‘irresistibly engaging’. I was left wondering, what about parents? Don’t they have a part to play in all of this, shouldn’t developments be irresistibly engaging for them too? Are they not important?

Too often when it comes to involving parents in schools it seems to be a one way transaction, simply focusing on informing them:

Many of these things are simply substitutions, with little augmentation. While coming back to Fullan’s argument, I question whether they are irresistibly engaging.

Reconsidering the list and thinking about how they could be changed, here are some ideas:

Each of these ideas and activities involve a modification of practise, but also in regards to mindsets. Many of these mediums provide the potential for parents to comment, ask questions and provide their thoughts. For some, this is fraught with danger. What if this or what if that. Such fear and trepidation though gets us nowhere. As Price points out, the world is going SOFT whether we like it or not, the question then is how we are going to embrace it. For me, it starts by fostering a culture of trust.

The reality is, many parents work irregular hours and do not necessarily always have the time to participate the way that we would like them to. The ideal of 9 til 5 is fast becoming a figment of the past. However, technology makes connections and communications that were previously not necessarily possible. Maybe there are schools already embracing such changes, if so I would love to know, please share. Or maybe ‘engagement’ is a poor metric, as Richard Olsen has suggested. Having said all this, we must always remember to never loose the human element. As always, comments welcome.

Irresistably Engaging … for Parents Too by Aaron Davis is licensed under a Creative Commons Attribution-ShareAlike 4.0 International License.

9 thoughts on “Irresistably Engaging … for Parents Too”