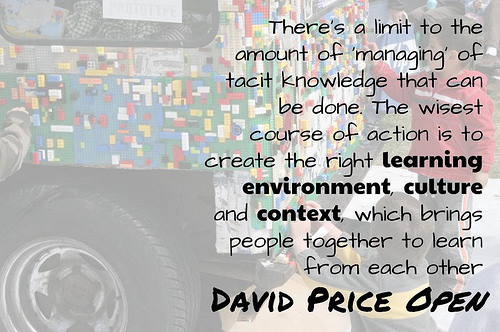 I recently started reading David Price’s book OPEN: How we’ll work, live and learn in the future. After extracts, reviews and recommendations I entered wondering what he would have to add to the debate about education. What interested me about Price was that, along with others like Graham Brown-Martin, his take on the future of education did not come via the usual teacher, turned academic, come consultant. Instead it was a bit more indirect. Such a point of view helps by bringing an outsiders perspective, rather than being caught up within schools and politics. It is a focus on learning, something not constrained to the classroom. Questioning what it is and what it maybe in the future.

Many of Price’s thoughts and observations touch upon various facets of society, pointing out that things are not always as the seem. One of the ideas though that really stood out was the notion of SOFT. When I first saw it mentioned I thought that Price was going to touch upon Thomas Friedman’s analysis of what matters in the 21st century are soft skills, such as leadership, humility, collaboration, adaptability and loving to learn and re-learn. However, this is not what Price means by SOFT.

For Price, SOFT is an acronym standing for four inter-connected, consequental values which he sees as integral for being open in the the 21st century.

In many respects, Price’s description of SOFT touches upon David Weinberger’s ideas about networked, society, where just because you are in the room, it does not make you smart. The warning is that going SOFT is now inevitable. It has allowed us to take control of our lives and make decisions which were often left to the experts in the past. As Price states:

It’s simply inevitable that, having helped shape how we now live, and work, these values will become central to how we learn. Embedding SOFT values into innovative learning environments is not without its dangers. Giving employees and learners greater freedom demands greater responsibility. Being transparent may provide disgruntled employees with the means to act maliciously. But we have to learn how to adapt, and we have to adapt how we learn. As W.E. Deming once said ‘Learning isn’t compulsory…neither is survival’. (Page 74)

So how are you adapting and learning in the 21st century? More importantly though, how SOFT are you?

For those interested, here are a couple of resources unpacking David Price’s book in more detail:

How SOFT Are You? by Aaron Davis is licensed under a Creative Commons Attribution-ShareAlike 4.0 International License.