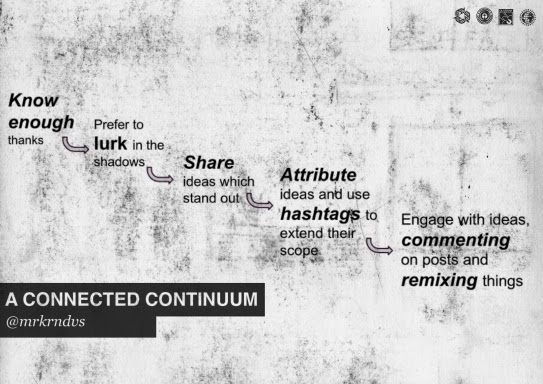 This post was first shared on +Peter DeWitt‘s blog Finding Common Ground on the 30th May 2014.

There is a documentary series called Who Do You Think You Are?, the premise of which is to to trace the journey of a celebrity back to their genealogical roots. From the odd episodes that I have seen, the show works because it takes someone whose life is seen as extraordinary and it finds their story in the odd and the ordinary.

This idea of tracing our identity back to the roots got me thinking about being a connected educator. There is often so much written about getting people connected. However, one of the biggest hurdles that I have found is bridging the gap between those in the shadows, lurking in the background, to creating a more engaged community which includes commenting and collaboration. One aspect that I feel is missing are the stories of how those now connected –  those sharing, engaging, participating – actually got to that point.

In his Ted Talk presentation on The Essential Elements of Digital Literacies, +Doug Belshaw suggests that new technologies often create new opportunities. “Every time you are given a new tool it gives you a different way of impacting upon the world.” What I feel is overlooked in this situation is what that impact is. No one was born connected, well at least not consciously connected, the question then is how they got to their current situation.

In many respects social media has been around in education in some shape or form for some time. However, there is still a gap in regards to the take-up. There are many different reasons for this. For +Dean Shareski, there is a digital dualism that needs to be overcome, while for +Tom Whitby the battle is over control and comfort zones. Often the arguments presented about the various benefits associated with being either connected or disconnected, however such arguments often provide little discussion of the middle ground, that space in-between and how to venture through it.

As I have discussed elsewhere, being connected and having a personal learning network is not something that is done, rather it is something that we do. My answer then is that instead of sharing the plethora of benefits, maybe we need to share our journey in all of its failures and various points of confusion.

It is important to recognise that when it comes to connecting that everyone does it differently and to borrow from +Doug Belshaw‘s work on digital literacies, sometimes coming to an understanding of what it means to be connected is just as important as actually being connected. For me, being a connected educator has involved five different steps:

Although each of these events can be considered in isolation, more significantly they can each be seen as interconnecting with and adding to the other. For example, I feel that my connections online have only been strengthened through the elaborations of my thoughts via my blog. The big question though, is what does it mean to be connected for you and how did you get to this point?

Late last year, Peter DeWitt wrote a response to the PLN Challenge that was going around. In it he shared 11 random facts and answered 11 questions set by Tony Sinanis. What was interesting though was that instead of setting 11 questions in return, Peter posed the question, what inspired you this year? This openness allowed those responding to make of it what they would.

In the same spirit of Peter’s openness, I put out the challenge, what are the markers that stand out in your journey in being a connected educator? You may not wish to write a long and elongated response as I have, but at the very least share something. Although I would love to hear your story, more importantly, it maybe the impetus for others to take the next step, whatever that maybe.

Being Connected, What is Your Story? – Originally Ran on Finding Common Ground (30/5/14) by Aaron Davis is licensed under a Creative Commons Attribution-ShareAlike 4.0 International License.

6 thoughts on “Being Connected, What is Your Story? – Originally Ran on Finding Common Ground (30/5/14)”