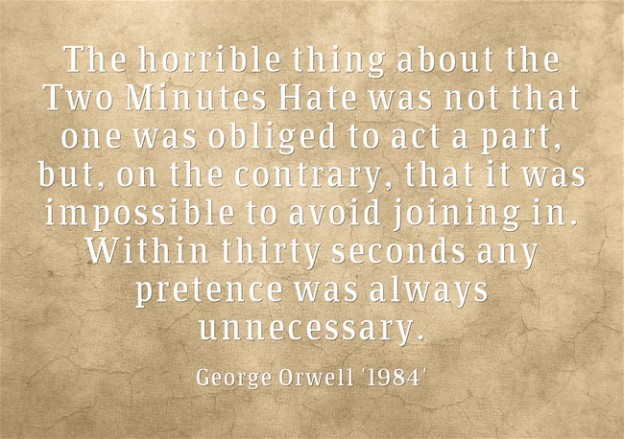 I have been reflecting quite a bit lately on what I see as the importance of making online connections with other educators and developing dialogues to continue the conversation about education. Some of the push back that I have gotten is about who those teachers are that I am actually connecting with and what agenda is really being pushed? The question that it has me wondering is whether being a connected educator automatically equals being radical? If not, then where is the middle ground or is there something else going on that is being missed?

The Good, the Bad and the Ugly

There is something about social media as a medium which lends itself to extremes. Take Twitter for example, often it is a case of the loudest statements that seem to stand out the most. Too often though this noise equates to latching ourselves to the latest panacea to all of education woes. In the process many fall in the trap of dispelling of the bathwater. Like Orwell’s Two Minutes Hate, no matter what our intentions may be, what efforts we make to include all voices, what aspirations we have to openness, it seems that time and time again our attitudes are moved to the side and replaced with the radical, which has become almost cliched. A prime example of this are the various Twitter chats, a point +Starr Sackstein recently made. Her argument is that they seem to be churning out the the recycled conversations week in week out.
In an interview with Charles Arthur, Jack Davis spoke about his experiences as a hacktivist with Lulzsec. He told how the deeper he got into the web the louder and more extreme the voices became. The voices were not necessarily about adding any value back to a community, but simply about standing out and being heard.

Although the world portrayed by Davis a contrast to many of the educational environments online, there is still something to be learnt from Davis’ experiences. For the one similarity is that so often it is the loudest, boldest and strongest voices that stand out and stand tall. In many respects, it seems to take more effort to actually be mundane and, ironically, being more mundane and seemingly ordinary doesn’t often get you heard. Maybe then the challenge is digging deeper, going beyond the hype, the radicalism and start there.

In a post reflecting on the purpose behind his blog, +Peter DeWitt reminisced on attempts to find some sort of common ground. DeWitt spoke about the emotions often attached to discussions associated with any discussion of education. The problem with this is that such emotions often lead to a lot of noise, but not a lot of listening. As he states, “people fight with others without really listening to what they are trying to say. They base opinions on hearsay and someone else’s opinions.” The answer according the DeWitt is to build consensus with those who we agree with and find a point of agreement with those who we don’t.
What stood out to me in DeWitt’s post was that the foundation to listening and respond was having a clear understanding about non-negotiables in regards to education. For DeWitt, the two areas in need of changes are high-stakes testing and having evaluation attached to them.

I would argue therefore that before we find common ground we need to develop a better idea about what matters the most to each and everyone of us. A point that I touched upon in regards to my post on pedagogical cocktails and education dreams. +Peter Skillen, in a post looking at the roadblocks to change, suggests that school leaders can do is supporting teachers as they ‘construct their own knowledge and practice’. Being clear on our own values and practises helps us be clear about what it is we are actually arguing about.

At the start of the year a furore erupted around a piece published by Johanna O’Farrell. For O’Farrell, the education system was broken, but not in the usual manner. Instead of arguing for radical reform as people like +Will Richardson call for, O’Farrell was coming from the perspective of the radical conservatives. According to her we have lapsed when it comes to the basic of literacy and numeracy. Instead of focusing on spelling and timetables, we have placed too much focus on inquiry and technology. My issue with O’Farrell was not her arguments so much, but the manner in which she went about it. She killed the conversation.
The various responses to O’Farrell highlighted an interesting condition. For our initial response to such situations is to identify with a particular idea or perspective and form our tribes. The problem is that unlike Seth Godin’s call to find something worth changing, often such situations become lost in a war of noise, with the boldest and loudest standing out. The reality is that, as +Dan Donahoo suggested at ICTEV13 Conference, authentic change involves engaging with a range of voices and differing ideas, that it takes a village. This was no a village, but a mass of warring tribes ready to inflict damage on each other. There was no common ground provided by either side.
I believe that in some respect the problem is not necessarily with the idea, radical or not, or our tendency to form tribes with like minded people. I feel that the big problem is our mindset. Being willing to enter into a dialogue about education requires a belief that although you may have a set of core values, you are willing to compromise in order to evolve the conversations.

The best thing that we can do then, in my view, is to constantly review what it is that we believe in and why we believe it. In an interview with the +Ed Tech Crew Podcast, +Dan Donahoo makes the suggestion of following the thoughts and ideas of not only those who we agree with, but more importantly, those who we don’t agree with. Doing this not only helps solidify what it is we truly stand for, but also gives us a wider perspective on things. For surely online communities should be about finding your own way as best you can, not about digging trenches and raising arms.

Another perspective on the problem of the radical was covered in a recent episode of Radio National’s Future Tense program focussing on the power of provocation. The message presented was that provocation does not work any more, well definitely not the way it used to. Whereas in the past there were less voices and not so much advertising, the change in society and media means that the focus moved from consumption to engagement. Instead of just making noise to be noticed, it is argued that we need to provide something that has the power to ignite a conversation. Such engagement though does not just come through identifying a good idea, but also presenting it in creative manner.
The big problem that we face is that such engagement in the modern world is easier said than done. Returning to social media, it is often stated that our attention associated with such mediums is only seconds. Therefore, some take to using big and bold statements with a hint of hyperbole to gain attention, while others resort to a cycle of posting and reposting, attaching their ideas to as many different causes through the use of various forums and hashhags. The problem with either of these approaches is that such actions actually risk disengaging the audiences that you are trying to engage.
+Alec Couros highlighted this problem in a response to Biosgraphy, a social network revolving around storytelling. They had set out on a campaign to spruik their new product by sending the same tweet to different users, therefore filling up the feed and gaining some sort of traction. On pulling them up on this approach, the company responded to Couros with a series of personal attacks. What the situation highlights is what Malcolm Gladwell identifies in his book David and Goliath, as the the inverted U-shaped curse. Gladwell discusses the negatives associated with either ends of the extremes. At some point you either don’t publish your links enough, therefore no one even knows you are out there, or you go to the point of spamming and people don’t even want to know you are there. Often it is presumed that sharing out links and continuing the conversation is always a good thing. However, at some point it can become too much of a good thing. The effort and intention to connect and engage in this situation has the opposite effect.
The reality is that connecting is not about volume or frequency, it is about chance and relationship. I am sure that there are many great ideas that go unread, that are not shared very much or which just don’t garner traction with a wider audience. However, sometimes the sharing of ideas is about connecting with the community. As +John Spencer suggested in a recent post, “For me, blogging has been more like a community of friends. It’s been where I find rest and wrestle with ideas and interact with a community that challenges me.”

Sometimes if an idea doesn’t take it isn’t so much about the idea, it is about the community. If we don’t build relationships, then in reality, who is going to relate to us. It was interesting that +Bill Ferriter recently reflected on disconnecting from social media in order to properly connect at ISTE14. Maybe this says something, that at its heart connecting with a PLN is about opening a dialogue and to do that you need a relationship.
Therefore in the end, if there is no community to belong to, no tribe to unite with, then maybe this is where people need to start, otherwise it will only ever be the noisy radicals that will stand out in the crowd. So the question needs to be asked, who are you connecting with that challenges your thinking? And what relationships are you building online?

Do You Have to be a Radical to be a Connected Educator? by Aaron Davis is licensed under a Creative Commons Attribution-ShareAlike 4.0 International License.

7 thoughts on “Do You Have to be a Radical to be a Connected Educator?”