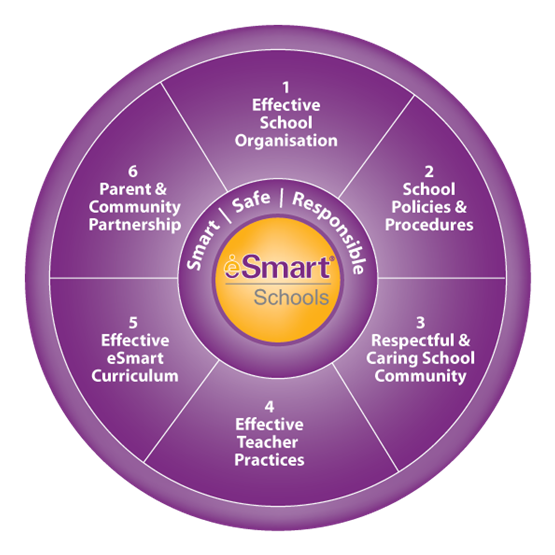 I recently wrote a post reflecting on the apparent ‘failure’ of the digital revolution. What came through from both my own reflections and the comments provided by others is that the reason for this supposed failure lies whole-heartedly with leadership. Whether it be at a local school-based level or at a governmental level, there has been a litany of errors. One of issues that often arises with the use of technology in schools are the ramifications for staff and students as their sense of citizenship has evolved to incorporate the digital realm. One organisation set up to alleviate such stresses has been the eSmart Schools Program.

The eSmart Schools Program was developed by the Alannah and Madeline Foundation, “a national charity with the belief that all children should have a safe and happy childhood without being subjected to any form of violence.” One of its main purposes is dealing with the threat of cyberbullying and child safety from the ground up. Unlike the reactive fear campaigns too often perpetrated in schools, the aim of the program is to be proactive. Instead of waiting for there to be a problem, the goal of the program is to develop a clear framework that sets in place a range of practises and policies that hopefully means there are no problems or if there are that they are responded to in an appropriate manner. All in all there are six domains that make up the framework which all work towards the smart, safe and responsible use of technology.

At the end of last term, +Catherine Gatt and I had the privilege of being a part of an eSmart Schools forum. The event was designed to get together a range of different representatives from schools around Melbourne to discuss how the program was going. Basically, the purpose of the session was to get as many different perspectives as possible in order to identify what the next chapter would be.

Some of the problems that my school has had on our journey to being an eSmart accredited school include:

The ideal situation in regards to leadership is to have a flat structure where every teacher and student is responsible. However, too many are still attached to a hierarchical structure where responsibility is carried by those at the top. Whereas the primary classes have had one teacher facilitating the whole program for both staff and students, in the secondary environment, too much is left to too few. Although many of the topics of bullying, digital identity and cyber-safety are often dealt with in Health classes, the message is often missed in other classes where in an already crowded curriculum, various eSmart initiatives are not seen as the highest responsibility.

Associated with a sense of ownership, there is the problem of scope and sequence. Although the core issues around identity are often dealt with in an explicit manner, it is areas such as plagiarism, appropriate researching online and attribution, which are too easily forgotten in the hustle and bustle of everyday teaching. The most obvious example is the use of digital images in the classroom. How often do staff, let alone students, actually consider whether they have the rights to use the images that they do? I must admit that it is only something I have started to consider seriously in the last few years. Basically, it becomes one of those situations where everyone and no one is responsible. Without it explicitly written into the curriculum, such aspects are too easily overlooked.

Along with a lack of clear leadership, the ongoing accountability and administration is left to too few. Instead of everyone having a sense of responsibility, it is too often seen as the responsibility of the eSmart co-ordinator. I understand that someone needs to organise things. However, that does not mean that they need to do everything. The worst thing with this is that such individuals simply can’t do everything as they are not privy to everything.

One of the underlying issues I have found with the whole program is where it actually sits within the school. Does it belong to welfare? Or is it an ICT thing? Ideally it should belong to both. However, this is easier said than done. The problem that I have seen is that when it is driven from a welfare perspective, some of the more technological aspects are overlooked, and vice versa.

One of the best things about the forum was the opportunity to not only share various hiccups faced along the way, but also to brainstorm various ideas and solutions for making things better. Some of the ideas included:

A Letter from Students to Parents about Issues

Too often letters are sent home from staff addressing issues and problems that arise in regards to technology and digital citizenship. A suggestion presented by another school was to get students to develop such letters. Not only do they then own the situation, but such letters have so much more meaning when they come from students. +Bill Ferriter wrote a really interesting post on creating a student advisory board as a medium for providing feedback from those who matter, I think that students writing letters could definitely fit into this.

An idea that one school put in place was a licence for students. Like the pen licence, the eSmart licence was for students who had completed a series of modules created by the school. It represented some recognition that students were as prepared for the digital world as they can be.

A Committee is eSmarter than a Coordinator

As David Weinberger suggests, “the smartest person in the room, is the room”. The question then is how many people are in the room? If the group in charge of implementing the eSmart program is only three people, how smart can the group be? So many schools spoke about how the program stalled when it was driven by a couple of individuals. The big challenge moving forward is to create a meaningful committee, that includes a wide range of voices (students, teachers, technicians, parents), which meets on a regular basis. Although a group was formed to review the school’s policy, once that had been achieved, the group soon dispersed. In addition to this, such a program can go into disarray when any one of those individuals moves onto new surroundings.

Overall, the big question that was discussed at the forum was where to next. What was unknown was what happened to schools that had gone through the process and received their accreditation. There is currently nothing in place to support schools in regards to maintaining their level of standard. In addition to this, the program is currently supported by the government and will soon come up for review. The question that was posed to those present was whether schools would be willing to pay an annual subscription for the right to be an eSmart School and what this would actually include, whether it be support or simply a recognition of a standard.

I hope that there is some sort of solution that will allow the program to continue beyond the five years. For it has provided a great framework to work with. It really makes me wonder though about the answer for ongoing change in schools? You look around education and see so many examples of people offering programs to implement, but too often the system fails to let them follow through with the initial vigour and see it truly blossom. I hope that eSmart can break that mould.

Have you gone through the process of becoming an eSmart Accredited School? What has been your experience? The highs? The lows? What do you see as the challenges being in regards to the next chapter.

Getting Smart with eSmart by Aaron Davis is licensed under a Creative Commons Attribution-ShareAlike 4.0 International License.

10 thoughts on “Getting Smart with eSmart”