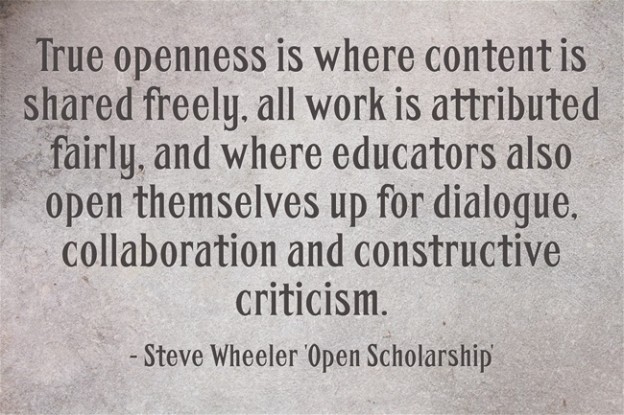 Alan Thwaites posted the following tweet and it got me thinking.

How is it that I use social media anyway and more importantly, what does it mean to be a connected educator anyway?
In a recent post about the benefits of blogging and being a connected educator, +Tom Whitby outlines some of the many benefits associated with sharing online. He states:

What stands out to me in Whitby’s post is that the whole process revolves around its reciprocal nature, that is, as a reader you not only take in various ideas, but also respond and add back. One of the big problems though with being ‘connected’ is that for some it simply means lurking in the background. Although they may draw on the dearth of ideas and information out there, there is no impetus to give back in anyway, shape or form. My question then is whether this is really connecting at all?
Whilst perusing the net a few weeks back, I got involved in a twitter chat with +Bianca Hewes about the matter of sharing. Hewes was ruminating about the one way flow of information that too often occurs online. Those situations where others ask for resources, but fail to offer anything in return. She tweeted:

It kinda irritates me when I’m a member of a fb group for teachers and people only ever post to ask for stuff… rarely offering stuff 🙁
— Bianca ‘Jim’ Hewes (@BiancaH80) March 12, 2014

If you read the ensuing chat involving Hewes, myself, Dick Faber, Audrey Nay, Teacher from Mars and Katelyn Fraser, there were a breadth of responses provided. Some of the concerns raised included the apprehension associated with looking like a dill and some people’s fear of sharing. A topic that +Chris Wejr has elaborated on elsewhere in his post ‘Not Everyone is Able to Tweet and Post Who They Are‘. On the flip side though, there were some really good suggestions provided, such as lurking for a time until comfortable, sharing something small or even simply re-tweeting something to add to the flow of information.
Thinking about all of the these great responses, I feel that there are three clear ways that we can respond and give back. They include the ability to share links and ideas, adding to a conversation by writing a response or remixing an idea creating something new in the process.

There are many ways to share, whether it be using social bookmarking, such as Diigo, where you might share with a particular community, or using social media, such as Google+, where you might share out into the world. This is something that I have elaborated on elsewhere. One of the easiest ways I find to share ideas though is on Twitter. Most applications offer the potential to post to Twitter with a click of a button, making it quick and easy to read a piece on Zite, Pocket or Feedly and then share it with the others.
There are many different perspectives associated with Twitter. For some, it is too much. How could you possibly keep up with each and every tweet posted by those that you follow? However, +Darrel Branson put a different spin on it in Episode 238 of the +Ed Tech Crew Podcast, where he suggested that mediums like Twitter are great to just dip into whenever you have the chance, not necessarily something to be hawked over 24/7. Branson suggested that if an idea is significant enough it will be shared around, re-tweeted and reposted enough that you will pick up on it in the end. What is important then is actually sharing good ideas and keeping the river flowing.
In addition to sharing, Bill Ferriter wrote an interesting piece on the importance of not only sharing, but also recognising whose content it is that you are sharing. One of the problems with many applications is that they allow you to quickly share the title and web link. However, they fail to provide any form of attribution to the actual creator. Therefore, I always endeavour to make the effort to give credit whenever I can. This has led me to use applications like Quozio in order to turn quotable pieces of text into an image in order to fit more into a tweet. To me, this means that while perusing something like Twitter, you are able to continue the conversation with creator, not just the curator.

Commenting and Continuing the Conversation

In addition to sharing ideas, another great way to give back is add a comment. Whether it be a video, an image, a blog, a post on Google+ or a tweet, writing a response is a really good way to continue the conversation. Too often when we think about commenting, there is an impression that it needs to be well crafted thesis, however it can be as simple as a confirmation thanking someone for what they have shared. Some other possibilities for comments include posing a question about something that you were unsure about, sharing a link that you think made add to the dialogue or providing your own perspective on the topic. The reality is, we often learn best through interaction and dialogue with others, a point clearly made in Whitby’s post.

A step beyond sharing and commenting on the ideas of others, is the act of remixing. Using someone else’s idea as a starting point, remixing involves adding something and turning it into something new, an idea in its own right. This blog itself can be considered as a remix, bringing together a range of different ideas in the creation of a new beginning. A great exponent of the remix is +Amy Burvall, whether it be using Mozilla’s Popcorn Maker to mash-up text and videos or using the paper app by Fifty-Three to create images to capture her ideas. Remixing ideas not only allows you to continue the conversation, but also start a new one as well.
…
Now I know that everyone comes from a different perspective and have their own view of what it is meant by digital literacy. A topic that I have explored elsewhere in my post ‘What’s So Digital About Literacy Anyway?‘ However, I find it hard to believe that there can be any example of being connected that does not include getting involved and giving back. A point clearly reiterated in Mozilla’s Web Literacy Map. The question then is how are you giving back? Is there something that you do that I have missed? What are the problems that you have faced along the way? I would love to continue the conversation, so feel free to leave a comment below.

Are You Really Connecting If You Are Not Giving Back? by Aaron Davis is licensed under a Creative Commons Attribution-ShareAlike 4.0 International License.

16 thoughts on “Are You Really Connecting If You Are Not Giving Back?”