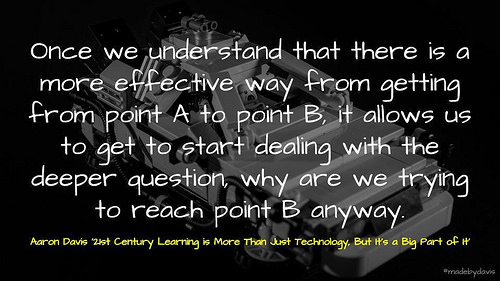 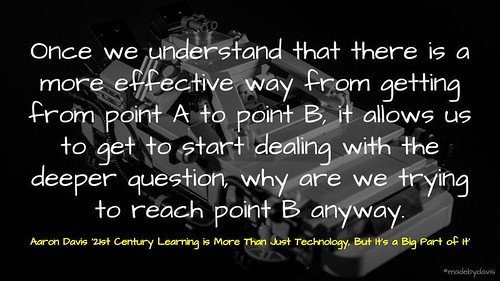 A colleague queried me the other day about the differences between a 21st century learner and someone who is really good with technology. This is a bit of an age old problem about what comes first, the device or the doing done with the device, the tool for working or the actual ways of working? As I have discussed elsewhere, I believe that something is misunderstood in this argument, for in many respects, they are inseparable.

In an insightful post debunking the naïve myth that “it’s not about the tool”, +Peter Skillen makes two key points. First, that computers are a form of media through which we can think about problems in a deeper way, and secondly, tools and technology shape our society in both intended and unintended ways. Often one of the arguments made about 21st century learning is that many of the attributes are possible without the use of technology. Surely you don’t need a computer to help you think? Although this may be true, I would argue that they are significantly amplified with the use of technology.

I remember my early days of incorporating ICT into the classroom, as a part of the YVeLC, and all my focuses were on using specific tools and programs. This is a point I made in regards to the Ultranet. However, tools are better considered as a means to enhancing various skills. In themselves, the use of tools are usually inhibited to lower order thinking – build, construct, produce – but used as a catalyse, they are a means to higher order thinking. For example, one does not:

Although each of these tasks are engaging and important in themselves, they lack potency if they are not linked to a deeper intention.

In the end, it comes back to a question of choice. Although a student could reflect on their lesson in PE and the various choices made, recording themselves and reflecting on it afterwards not only provides a wider perspective for the person in question not possible if it is left to just them, rather it allows for a deeper sense of self-reflection, often leading to answers in a shorter amount of time. For there are many ways of travelling from point A to point B. Clearly, one could walk, but if one rode, they would get to their destination quicker, while if they drove they would get their even quicker again. Although technology and tools are not essential to learning in the 21st century, they are definitely a big part of it. I think that once we understand that there is a more effective way from getting from point A to point B, it allows us to get to start dealing with the deeper question, why are we trying to reach point B anyway, but I’ll leave that for another day.

21st Century Learning is More Than Just Technology, But It’s a Big Part of It by Aaron Davis is licensed under a Creative Commons Attribution-ShareAlike 4.0 International License.

6 thoughts on “21st Century Learning is More Than Just Technology, But It’s a Big Part of It”