Skip to content
There has been a lot shared lately as a part of Connected Educator Month about the benefits of connecting online. In many respects, I agree with +George Couros that ‘isolation is now a choice educators make‘. However, something overlooked in many of the discussions and debates are some of the taboos associated with being a connected educator. Some of the reasons why teachers do make the choice to stay isolated.

In a recent post, Peter Dewitt spoke about how he saw a photo come up in his feeds from an ex-student, whom he had taught in Year 1. She was photographed finishing her last teaching round. It got me thinking, when is it ok to connect with students (and ex-students) online? Another similar example that comes to mind is from +Adam Bellow‘s inspiring keynote from ISTE2013 where he invited people to ‘change the world’. A part of this is utilising the power of social media to connect with students through such mediums as Facebook. In addition to this, +Anne Mirtschin‘s many posts and presentations on connecting online seem to be littered with incidental connections with students in and out of school in a whole range of spaces. Now I am not saying that any of these situations are wrong, but it begs the question, when do we cross the line, when does our relationship with students go from being a professional one to being personal?
A few years ago, a friend of mine who works at a different school told me about how his principal directed teachers to remove all ex-students from their social media accounts. He spoke about the threat of images and ideas being spread, the spectre of being sued for negligence and a litany other things. Now I am not sure if the principal in question was mandated by their region to tell the staff this, but what confuses me about such situations is that little attention was given to what teachers actually publish online in the first place. I know some teachers who won’t even connect with other teachers online, let alone ex-students, in the fear of being caught out and incriminated, while there are others who won’t connect with anyone and simply leave social media altogether. I have written about the culture of fear elsewhere. To me, this makes me wonder what are they afraid of? For some, it is a fear of their lifestyle choices outside of teaching crossing over into their professional life. Others, it is a political decision, a refusal to share personal information and ideas with online corporations. Sadly, what is not brought up enough during such discussions amongst staff is what is published online, rather than who we are publishing too.

Connecting in the Classroom

Attached to his website, +stephen heppell and his wife, have provided a different take on the social media phenomena. Instead of running from it, the Heppell’s propose that we run to it in a safe and constructive manner. Correspondingly, they have developed a list of some do’s and don’ts associated with using social media safely in the classroom.
Some of their do’s include:
Some of the don’ts include:
Now in some respect, I think that sites such as Facebook and Google+ have actually come a long way since 2010 when the Heppell’s space was last updated. For example, you are now able to ‘post’ and ‘share’ with different groups and circles, you are therefore supposedly able to maintain different connections within the one ‘presence’ (although I wouldn’t want to post the wrong information to the wrong group, may be a bit awkward.) However, many of the original tenets remain pertinent today. Whatever medium you are communicating in, it is always important to have boundaries.
I think that this is sometimes why some staff have issues with students sending emails to their school email account. For them, this crosses their private and personal boundary. They just don’t expect to have students sending through questions, while they are checking their work email. Whether it is using a school’s student emailing system to engage with students or setting up spaces like Edmodo, the most important thing is to set up boundaries. The problem is though that such boundaries are often left unset or worse, they are set by the habits of other teachers whose classroom culture creates a different set of expectations.
A simple example of where a clear set of boundaries has been set up comes from +Richard Lambert. In his school two different email accounts have been created to differentiate between staff to staff communications and student related communications. The school’s Google Apps for Education account email that staff and students get is used to facilitate collaboration and connections between staff and students, while staff’s edumail accounts are left for professional correspondences.
Sometimes though there is something even more than boundaries, sometimes the question is what we choose to publish in the first place.

Duty of Care … To Ourselves 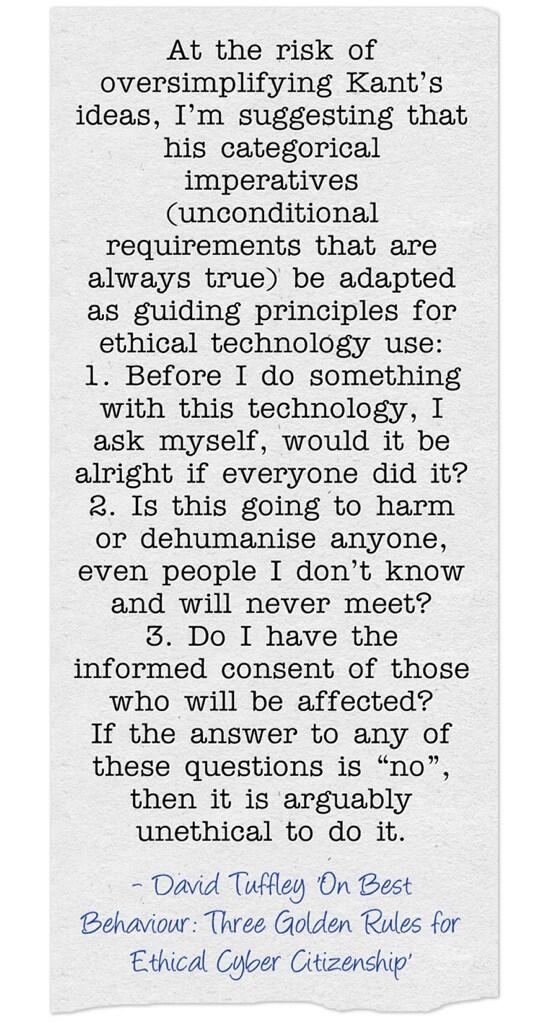 Just as there is some confusion at times where duty of care and professional responsibility starts and stops, so too is there a dangerous blurring between our private and professional relations when it comes to our online identify. Often, through social sites such as Google+ and Facebook, we connect with people in the community that we work in. Whether it be someone met at the gym or a team mate at a local sporting club, these online associations often compromise who we are and raise questions about our actions. The big challenge is that we are all many things to many people. For some, this is just too much to handle.
I have been privy to many a holiday briefing where staff are warned about how they ‘act’ in public over the break. This fear can lead to some staff almost refusing to go out in the community in which they work in, instead going to great lengths to create a divide between their professional and private worlds. Sometimes though, you can never escape past students or parents in the community. I remember a fellow staff member sharing a story about how she bumped into an ex-student at three in the morning a long way from home.
I think that this dilemma of trying to create a divide between our private and public worlds relates to our online identity as well. No matter how far you run, how many walls you hide behind, you still leave a trace whether we like it or not. Often we provide information to corporations whose goal is to make money, they often slip with keeping information and accounts private. Facebook, for example, has a long history of ‘accidentally’ changing users privacy settings, switching them from private to public.
Although I clearly don’t agree with what Facebook does, my bigger concern is what we put up online in the first place. The big question, in my view, is that we continue to think that we can really have a public and private divide completely separated from each other? We speak to students about the issues associated with digital citizenship, when in fact many of us fail to heed the warnings ourselves.

Eventually, but not soon enough for some, society evolves rules of acceptable use that become established as standard behaviour.

As various sources of technology becomes a part of our everyday lives, we need to consider what these ‘rules’ should be. Addressing our universal actions online, Tuffley appropriates Kant’s notion of ‘categorical imperatives’. He outlines three suggested guiding principles for the ethical use of technology:
Whether Tuffley is right or wrong, I think that it highlights one important factor, that we need to better self-monitor ourselves when it comes to technology. For in the end, our first duty of care should be to ourselves, for if we cannot maintain our own public identity, what hope do students have?

Now I am not saying that all the points and ideas that I have discussed here are right, such as connecting in the classroom, but they do deserve to be given due diligence. If teachers are to become more connected, then these are some of the things that need to be discussed. Instead of young potential leaders going offline in the fear that their digital footprint may hinder their climb or locking themselves within their gated communities, we need to discuss these issues in a more meaningful manner. The question that we always need to be mindful of through all of these discussions is what are the consequences of our choices and, in particular, what possibilities are being missed if we make the decision to stay isolated, rather than being connected.

A Meditation on the Taboos Associated with Being Connected by Aaron Davis is licensed under a Creative Commons Attribution-ShareAlike 4.0 International License.