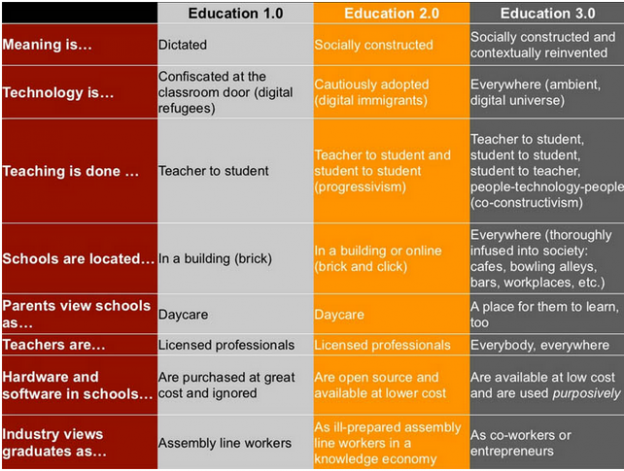 One of the biggest challenges for the 21st Century is the move away from the notion of teacher at the centre, ‘sage on a stage’, in control of learning and the classroom, to the idea of the teacher as a facilitator, supporting students at the side, just as much a part of the learning process as everyone else. A chart adapted from the work of John Moravec sums up this conundrum by splitting education up into three versions: Although there seems to be a big chasm between education 1.0 and education 3.0, the first challenge in many classrooms is to give voice and empower the different people in the classroom, moving beyond just those who seek to be heard. This inclusiveness includes teachers, not just students. In my endeavours, I have found that technology can be a great support in helping facilitate this change, particularly in an environment where students have 1 to 1 access to computers, laptops, netbooks and tablets. Below I will go through some applications and how they can be used to give voice in and out of the classroom.

Online pin boards containing posts is great place to start sharing online. Padlet is one such space where students can post digital sticky notes. Similar to Google Docs, Padlet allows different levels of accessibility and also allows the creation of unique web addresses for each page. One of the benefits to Padlet is that it not only allows users to post text based comments, but also attach web links and documents. In my view, one of Padlets biggest selling points is that you do not necessarily need an account to create a wall and add a sticky note (although this can also be a danger). One of the limitations of Padlet is that there is no avenue to comment on each of the posts, other than adding another notes, therefore limiting the scope for any sort of digital dialogue. Some of the ways in which I have used Padlet in the classroom is to develop brainstorms, collect together different resources, garner reflections, as well as share and publish work.

A more formal way of collecting information and listening to different voices is through the use of forms and surveys. A part of the collection of applications associated with Google Drive, Google Forms allows you to create forms, incorporating a wide range of options, including short answers, multiple choice, scale and check-boxes  Forms can be completed by anyone who has the link. In addition to this, Google recently added to the ability to insert images and develop Forms collaboratively. After using one of the many URL shorteners, I have used Google Forms to gather opinions relating to book choices, conducting term and unit reflections, as well as providing students with a means to assess themselves. Once completed, the results can be viewed in an associated spreadsheet or in a visual format. One of the strengths and weaknesses of Google Forms is its anonymity. In my view, students and teachers are often more willing to write things and provide their thoughts when they feel that they will not be held to ransom.  However, this also limits the ability to provide any direct feedback, that is unless you insert a question such as: ‘what is your name’. I have done this when the task is focused on the responses of individual students.

Similar to the idea of forms and surveys, student response systems are a flexible way to gather information and responses in the classroom. Socrative is one such student response system, whose claim to fame is its ability to run on any system. Like Google Forms, Socrative offers a range of question formats, including true/false, multiple choice and short answer. It also allows you to create (and share) quizzes, as well as pose questions on the fly. There are two different welcome screens, one for teacher and the other for student. When teachers register, they are given a unique room number. All students need to do is enter the associated room number in order to participate. One of the interesting potentials of Socrative in regards to giving voices to students in the classroom is the idea of an exit ticket, where students need to complete a series of short questions in order to ‘exit’ the classroom. Like Google Forms, responses to quizzes are put into an Excel document and can be either accessed online or sent to the email attached to the teacher profile. However, responses to single question activities need to be copied into platform or else they are lost. I have particularly used Socrative to capture ideas and answers on the fly.

Another powerful method for engaging different voices in and out of the classroom is through the use of social bookmarking. There are many different sites dedicated to collecting and sharing online, such as Del.icio.us, Pinterest and Diigo, just to name a few. What these sites also provide is a means for critically and collaboratively connecting together information by saving, liking and commenting. For example, in the case of Diigo, you are able to not only keep your own library of resources, but also share with groups that you may belong to and follow the activities of other people in your network. Often planning documents have a stagnant list of resources, at the very least, sharing this information online allows it to be something more organic which is constantly changing and adapting.

Which Voices Are You Hearing?

I am more than aware that for every program, there may be other possibilities and potentials, such as Survey Monkey for creating structured surveys and Poll Everywhere for capturing spontaneous responses. In addition to this, I am more than willing to accept that many of these applications merely substitute something that already occurs or could occur in the classroom without technology. However, the one question that remains is: how are you giving voice to students in the classroom?

Listening to the Other Voices in the Classroom by Aaron Davis is licensed under a Creative Commons Attribution-ShareAlike 4.0 International License.

6 thoughts on “Listening to the Other Voices in the Classroom”